The Return of Sunshine Poems by a Laureate for Ecstatic Grandparents 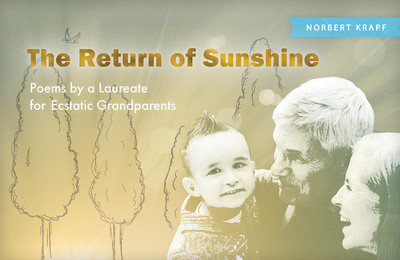 The Return of Sunshine: Poems by a Laureate for Ecstatic Grandparents

In their seventies, Norbert Krapf and his wife Katherine became grandparents for the first time. The result was this outpouring of celebratory poems by the former poet laureate of Indiana that make a unique gift for any “ecstatic” grandparent—especially those who love poetry and cute grandkids.

This book is about Krapf's Colombian-German-American grandson, Peyton. The volume of 67 poems deals with Peyton’s multicultural heritage, his evolving skills in speaking English and German, visiting with his American grandparents in both Indianapolis and Regensburg, and his adventures in Germany and Europe with his Colombian-American mother and Franconian (northern Bavaria)  father. The third and last section describes Norbert’s visit for a day with Peyton in his outdoor WaldKiga, a kindergarten deep in the woods near Regensburg, Germany.

In the Author Introduction, Krapf says: “The title of this poetry collection, The Return of Sunshine, comes from a prayer-poem in Section II. One cold and damp German winter morning, as the sunshine broke through dramatically, Opa [Grandpa] composed it spontaneously, out loud, looking out the window of Peyton’s Regensburg bedroom. By invitation, Peyton recited each line as he heard it come off his grandpa’s tongue. Both enjoyed their collaboration in giving thanks. In retrospect, Opa realizes that the title of this new collection hints at his relief in moving in a different direction after publishing two recent books about surviving and recovering from child abuse by a priest. The first is Catholic Boy Blues, a poetry collection, and the second, Shrinking the Monster, a prose memoir that describes the challenges in writing those poems and outlining the stages of his recovery to help his fellow survivors begin theirs. One day The Return of Sunshine will help Peyton realize how much his wonderful presence helped his grateful Opa heal.”

The cover photo and seven photos in the book, one in color, are by prize-winning German photographer Andreas Riedel, who provided the cover for Norbert’s Looking for God’s Country collection (2002). This collection includes two dozen poems inspired by the work of Andreas, a resident of Norbert’s ancestral region, Franconia, located in northern Bavaria.

The three sections of the collection are titled I. “Meeting My Grandson in Regensburg”; II. “Cheerios in Tuscany”; and III, ”In the Woods Kindergarten.”  For a view of the Table of Contents listing all poem titles, click here.

Three of the poems, “Meeting My Grandson in Regensburg,””Cheerios in Bed in Berlin,” and “A Voice Speaks Late of You,” are available for reading on the blog site of Flying Island, the online magazine of the Indiana Writers Center; four can be read in the “Christmas Cards series" on the author’s website: “The Golden Leaf,” “The Bringer of Light, “The Blessing of Attention,” and “At Your Welcoming Party”; and a video of Norbert reciting “Singing Indiana Bird Song to My Grandson” with musical backing by bluesman Gordon Bonham can be watched here.

Dreams for Your Grandchild The Hidden Power of a Catholic Grandparent

Poems And Prayers For Easter

Dreams for Your Grandchild The Hidden Power of a Catholic Grandparent

Being a Grandparent Just Like Being a Parent ... Only Different

When Did Everybody Else Get So Old? Indignities, Compromises, and the Unexpected Grace of Midlife

The Little Book of Christian Mysticism

An Invitation to Celtic Wisdom

Sharing the Wisdom of Time