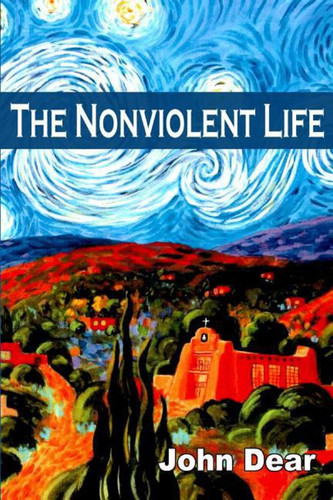 "How can we become people of nonviolence and help the world become more nonviolent? What does it mean to be a person of active nonviolence? How can we help build a global grassroots movement of nonviolence to disarm the world, relieve unjust human suffering, make a more just society and protect creation and all creatures? What is a nonviolent life?"

These are the questions John Dear, Nobel Peace Prize nominee and Pace e Bene staff member poses in his latest book, The Nonviolent Life. He focuses on three important aspects on the path toward becoming people of nonviolence - being nonviolent toward ourselves; being nonviolent to all others (including creation and creatures); and joining the global grassroots movement of nonviolence.

After thirty years of preaching the Gospel of nonviolence John says he has never found a book that completely captures these crucial elements of nonviolent living. According to John, "most people pick one or two of these dimensions, but few do all three. To become a fully rounded, three dimensional person of nonviolence we need to do all three simultaneously." In this book, John Dear explores the powerful journey of nonviolence rooted in the Christian vision of love. He also offers discussion questions throughout the book making it ideal for study groups seeking to go deeper into the nonviolent life. Order your copy today and journey with John along the path of the nonviolence. Published by Pace e Bene Press

John Dear is an internationally known voice for peace and nonviolence. He is a popular speaker, peacemaker, organizer, lecturer, retreat leader, and the author/editor of 30 books. He has organized and participated in nonviolent campaigns for over three decades; been arrested some 75 times in acts of civil disobedience against war and injustice; and spent nearly a year of his life in jail for peace. Recently, John was nominated for the Nobel Peace Prize by Archbishop Desmond Tutu. For further information, see www.johndear.org

The Nonviolent Coming of God