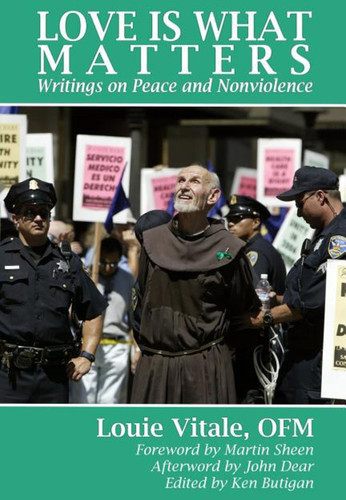 Love Is What Matters: Writings on Peace and Nonviolence

Love is What Matters gathers the writings of a dedicated Franciscan priest and peacemaker, Friar Louie Vitale. In this series of essays written over the course of nearly thirty years he recounts his nonviolent striving towards peace and justice to end war, torture, racism, poverty, climate destruction and greed in the spirit of St. Francis of Assisi. Published by Pace e Bene Press (Paceebene.org)

Fr. Louie Vitale is a Franciscan priest who has sought to put the vision of peacemaking articulated and practiced by Francis and Clare of Assisi into practice. A former provincial of the St. Barbara Province in the western United States, Vitale was a co-founder of the Nevada Desert Experience-a spiritually-based movement that sought to end nuclear weapons testing at the Nevada Test Site-and Pace e Bene Nonviolence Service. As a long-time social activist, he has engaged in civil disobedience for nearly four decades in pursuit of peace and justice, and has been arrested more than 400 times.

The Nonviolent Coming of God

The Alzheimer's Spouse Finding the Grace to Keep the Promise