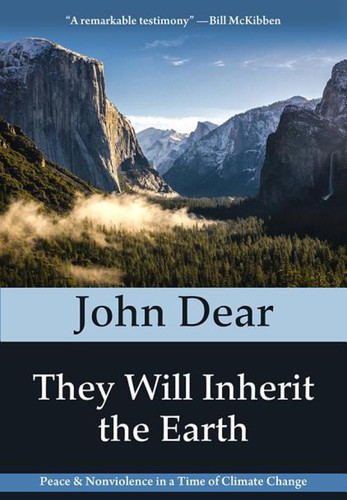 They Will Inherit the Earth: Peace and Nonviolence in a Time of Climate Change

subtitle:
Peace and Nonviolence in a Time of Climate Change
paperback:
true
min:
$16
title:
They Will Inherit the Earth
pricing:
$16 - $18

Longtime activist John Dear invites us to return to nonviolence as a way of life and a living solidarity with Mother Earth and her creatures.

In the Beatitudes, Jesus says of the meek, "they will inherit the earth." Meekness, John Dear argues, is the biblical word for nonviolence. He makes the connection Jesus makes at the start of his Sermon on the Mount between our practice of nonviolence and our unity with creation: our rejection of nonviolence is inevitably linked to the catastrophic effects of climate change and environmental ruin.

Drawing on personal stories of his life in the desert of New Mexico, his time as a chaplain at Yosemite, his friendship with indigenous and environmental leaders, his experience at the Standing Rock protests, as well as his work with the Vatican on a new stance on nonviolence, John Dear invites us to return to nonviolence as a way of life and a living solidarity with Mother Earth and her creatures.

This is a remarkable testimony summing up a remarkable life: nonviolence is our greatest tool, and here you see it wielded with kindness, firmness, and skill.

John Dear, SJ, is a Jesuit priest, peace activist, organizer, lecturer, and retreat leader. He is also the author/editor of twenty books on peace and nonviolence. John was recently nominated for the Nobel Peace Prize by Archbishop Desmond Tutu of South Africa. John lives in northern New Mexico. Visit his Web site at www.persistentpeace.com.

These Thy Gifts A Collection of Simple Meal Prayers

Three Saints Women Who Changed History - Genevieve of Paris, Catherine of Siena, and Teresa of Avila

The Way of Prayer Learning to Pray with the Our Father

The Way of Faith A Field Guide for the RCIA Process