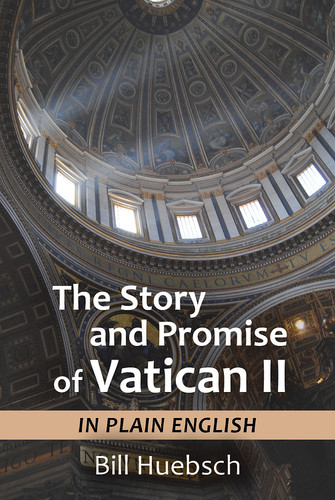 The Story and Promise of Vatican II: in Plain English

The story and promise of the Second Vatican Council are part and parcel of the church’s daily life throughout the world. It isn’t possible to prepare for or enact pastoral ministry today without being a student of Vatican II. From participatory liturgy to whole-family faith formation, from the RCIA to the deaconate, and from the renewed call to holiness to the renewed age of mercy, the springboard of the modern church is Vatican II. Because of this, knowing about the story of Vatican II is essential to understanding its promise.

This volume tells that wonderful story of the council—and it does so in plain English. It follows an exciting chronological pathway from the beginning of the council to its final bell. But the deep promise of the council is found in the documents themselves. Church documents don’t always make for compelling reading but the plain English presentations which author Bill Huebsch provides here make this book a page-turner! Huebsch captures the excitement and rapidly unfolding drama—all set in the theater of St. Peter’s Basilica during those four years in the early 1960s. He treats each character with dignity and respect, moving beyond the judgments of “too liberal” or “too conservative” that have dogged the Church and created division rather than unity. This book fills its readers with hope and equips them to unfold the promise of the Second Vatican Council in today’s world.

Peek inside!
Written by Bill Huebsch

What Happened at Vatican II

New Normal? Re-emerging from the Pandemic with the Flock