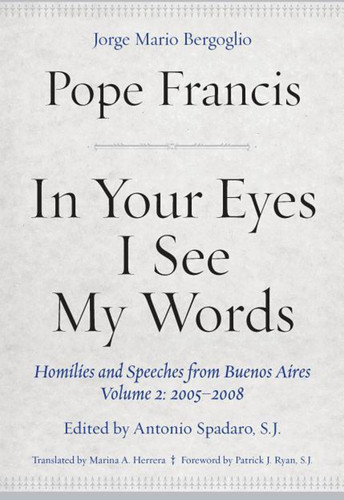 "[Pope Francis] . . . has the opportunity as universal shepherd to educate the rest of the world about the Latin American experience of the cultural wealth of the poor." --Patrick J. Ryan, S.J., from the foreword

An extraordinary opportunity to understand, through unique texts, the nature and vision of a great pastor who has conquered the Vatican from the outskirts of the world. --Foreword by Patrick J. Ryan, S.J. - xi

In Your Eyes I See My Words, Volume 2 contains Pope Francis's homilies and speeches spanning from 2005 to 2008. Continuing what began in the first volume of this three-volume publication, Volume 2 shows Archbishop Bergoglio's growth as a pastor and a theologian/scholar in the midst of his people. At the same time, it shows him emerging as an international voice calling for changes in the way the Church carries out its ministry and its educational task on behalf of children, youth, adults, and church ministers. In his homilies from Christmas, Easter, and especially in his response to the tragic fire and deaths of 194 people at the nightclub Republica Cromañon, we see Bergoglio speak passionately to his parishioners, challenging them with equal portions of tenderness and righteous anger. Perhaps uniquely, we also watch as his audiences, prominence, and influence grow globally, foreshadowing who he will become in 2013 when he is elected Pope.

On the larger national and international scale, Bergoglio addresses various conferences, such as the Argentina Press Association and the Episcopal Conference of Argentina of which he was elected President in 2005 and served the maximum possible term of six years. We see and read as his work takes him outside his country to Rome (2007) at the Pontifical Commission for Latin America; to Brasil (2007), where his presentation on the Crisis of Civilization and Culture at the Fifth CELAM Conference ends up shaping much of the Aparecida Conclusions; and finally, to Quebec (2008) as he speaks at the Forty-Ninth International Eucharistic Congress.

All told, In Your Eyes I See My Words, Volume 2 is a glimpse into a period of time in which Archbishop Bergoglio grows immensely in thought, reflection, and action, laying the groundwork for the mature, thoughtful, and beloved Pope Francis he has come to be known as around the world.

The Joy of Evangelization - 3
Address on the Sunday Homily at the Plenary Assembly
of the Pontifical Commission for Latin America, Rome--January 19, 2005

We Take Refuge in the Name of the Lord - 13
Homily, First Month Anniversary after the Tragic Fire at the República
Cromañón Nightclub--January 30, 2005 (Transcript)

"He Went Up the Mountain and Summoned Those Whom He Wanted" - 14
Opening Address, Archdiocesan Catechetical Encounter
(EAC)--March 12, 2015

"Today This Scripture Passage Is Fulfilled in Your Hearing" - 21
Homily, Chrism Mass--March 24, 2005

Coherence Is Tilling Within the Heart - 26
Homily, Mass in Memory of His Holiness John Paul II-- April 4, 2005 (Transcript)

Let Us Not Waste the Opportunity Given to Us - 28
Letter to the Educational Community--April 6, 2005

Loving Tenderly in Every Detail - 52
Homily, Shrine of Saint Cajetan--August 7, 2005

"Mother, Help Us to Care for Life" - 55
Letter on Childhood, Thirty-First Youth Pilgrimage to Luján--October 1, 2005,
Feast of Saint Thérèse of the Child Jesus, Patroness of Children in the Archdiocese

The Lord Purifies through Tears - 66
Homily, First Anniversary Mass for Those Lost in the República
Cromañón Tragedy--December 30, 2005 (Transcript)

The One Who Nourishes and Brings about Growth - 73
Address at a Seminar for Rectors--February 9, 2006

The Church Cannot and Should Not Remain on the Sidelines in the Fight for Justice - 78
Presentation of the Book Church and Democracy in Argentina--March 6, 2006

A Model of the Tireless Pilgrim - 82
The Archdiocesan Catechetical Encounter (EAC)--March 11, 2006,
Readings for the Second Sunday of Lent, Year B

A Truth That Is Not Good Is a Good That Is Not True - 85
Presentation to Argentina Press Association (ADEPA) Conference--April 6, 2006

We Are a People with a Vocation for Greatness - 96
Message to the Educational Community--April 27, 2006

The Blood of Martyrs Is the Seed of Christians - 129
Homily, Thirtieth Anniversary of the Martyrdom of Bishop Enrique A. Angelelli, La Rioja--August 4, 2006 (Transcript)

He Gifted Her to Us as Mother and Gave Us to Her as Her Children - 142
Homily, Thirty-Second Youth Pilgrimage to Luján--October 1, 2006 (Transcript)

The Tender God Suffers Because of the Hardness of Our Hearts - 143
Homily, First Congress on Evangelization of Culture--November 3, 2006 (Transcript)

You Will Be Blessed Because of Their Inability to Repay You - 145
Homily, Ninety-Second Plenary Assembly of the Argentina Episcopal Conference, Pilar--November 6, 2006

Parish and Family - 153
Position Paper at the Plenary Assembly of the Pontifical Commission
for Latin America, Rome--January 18, 2007

We Are Invited to Bring, with Apostolic Fervor, Anointing to the Margins - 169
Homily, Chrism Mass--April 5, 2007

To Educate Is a Shared Commitment - 174
Message to the Educational Community--April 18, 2007

Education Is a Dialogue - 190
Homily, Mass for Education on Friday of the Second Week of Easter--April 18, 2007 (Transcript)

"No Disciple Is Above His Teacher" - 192
Homily, Opening of the Episcopal Assembly--April 23, 2007,
Monday in the Third Week of Easter

Unique Challenge: The Crisis of Civilization and Culture - 196
Position Paper at the V CELAM Conference, Aparecida, --May 1, 2007

When the Spirit of Truth Comes, He Will Guide You to All Truth - 206
Homily, Eucharistic Celebration at Aparecida, Brazil--May 16, 2007 (Transcript)

When We Pray We Are Fighting for Our People - 213
Letter to the Consecrated Men and Women of the Archdiocese--July 29, 2007, Year C

Showing Mercy - 225
Homily, Opening Mass for the Ninety-Fourth Plenary Assembly of the Argentina Episcopal Conference--November 5, 2007, Monday for the Thirty-First Week in Ordinary Time, Year I

Today the Place of the Christian Is the Street - 260
Homily, Palm Sunday, San José de Flores Basilica--March 15, 2008, Year A (Transcript)

Let Us Plant the Banner of Faith in Our Daily Life - 266
Homily, Opening Mass for Plenary Assembly of the Argentina Episcopal Conference, Monday in the Third Week of Easter-- April 7, 2008

Return to the Roots of the Faith: Mission as Proposal and Challenge - 270
Address, First Meeting of the Presbyteral Council--April 15, 2008

The Eucharist and the Church, Mystery of the Covenant - 295
Catechesis at the Forty-Ninth International Eucharistic Congress, Québec, Canada--June 18, 2008

We All Have a Debt to Others: To Love - 311
Homily, Eucharistic Celebration of Migrants Day at the Shrine of Our Lady, Mother of Emigrants--September 7, 2008 (Transcript)

The Message of Aparecida to Priests - 314
Presentation to Priests, Brochero, Córdoba, Argentina--September 11, 2008

Be Welcoming to All, Accepting with Meekness - 325
Homily, Opening of the Ninety-Sixth Plenary Assembly of the Argentina Episcopal Conference, Pilar--November 1, 2008

An uplifting, positive, beautiful and much needed read at this time in the world with the Coronavirus pandemic . . . Each sermon is meant to be positive or a wake up call to be better and do better; for yourself and others around you. Pope Francis is certainly an eloquent speaker and a symbol of hope and love. This is a powerful book.

An uplifting, positive, beautiful and much needed read at this time in the world with the Coronavirus pandemic . . . Each sermon is meant to be positive or a wake up call to be better and do better; for yourself and others around you. Pope Francis is certainly an eloquent speaker and a symbol of hope and love. This is a powerful book.

Jorge Mario Bergoglio, Pope Francis (Author)
Pope Francis was born in Flores, Buenos Aires, Argentina, on December 17, 1936, entered the Society of Jesus at age twenty-one, and was ordained in 1969 with a degree in philosophy. He became auxiliary bishop of Buenos Aires in 1992, archbishop in 1998, and cardinal in 2001. He was elected as the first Jesuit pope on March 13, 2013.

Antonio Spadaro (Edited By)
Antonio Spadaro, S.J., is editor of the review La Civiltà Cattolica and teaches at the Pontifical Gregorian University.

Pope Francis Speaks to the United States and Cuba Speeches, Homilies, and Interviews

Seasons In The Word Liturgical Homilies - Year B

All Are Welcome Here Practicing Christ’s Call to Hospitality