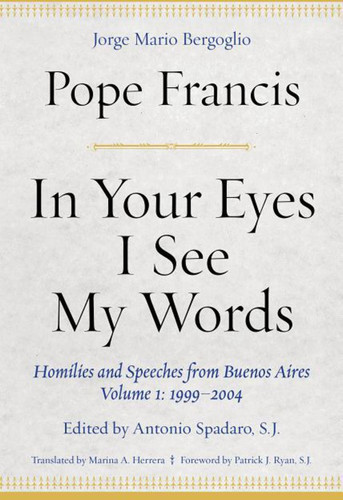 An extraordinary opportunity to understand the vision of Pope Francis

Pope Francis is a first in many ways: the first pope from the Americas, the first Jesuit, the first Francis, the first child of immigrants from the Old World, nurtured and transformed by the New World, and returned to lead the whole world. His eloquent homilies and speeches have inspired the faithful of Argentina for decades, largely through his gift of oratory, tracing back to his time as a bishop, archbishop, and cardinal in his home country. Published in English for the first time in their entirety and with contextual annotations, In Your Eyes I See My Words, Volume 1 collects his homilies and speeches from 1999 to 2004. Volume 2 spans from 2005 to 2008, and Volume 3, from 2009 to 2013, concludes with his prophetic last homily before his election to the papacy.

This illuminating collection presents an extraordinary opportunity to understand the vision of a great pastor. His words bear witness to the deep experience of faith among God's people while also showcasing his own extraordinary ability to connect with communities of faith. Through these homilies and speeches, Pope Francis humbly displays his abilities as a wordsmith, a patient and attentive teacher, an inspired and faithful theologian, and a sensitive pastor uniquely attuned to his people, offering ready guidance for their journeys, but also journeying with them.

The first of a three-volume translation of Pope Francis's theological, pastoral, anthropological, and educational thought provides rich insights into the mind and theological unfolding of a spiritual leader who has become beloved all across the globe. Within it we see Archbishop Jorge Mario Bergoglio--later Pope Francis--ministering to the needs of the people while also engaging with the political, technological, and societal forces affecting their daily lives. Here is an ecclesial voice not afraid to challenge the politicians, the culture-makers, and media moguls--even his own ordained and lay church ministers--to live a life of faithfulness marked by justice, equality, and concern for the needs of everyone, urging all to rely on the "vitality of memory" and the "recovery of hope." In Your Eyes I See My Words also provides a glimpse into the political, social, and religious environment of Argentina and Latin America, providing a unique perspective on the issues confronting the faithful and how those issues motivated and nurtured Pope Francis's understanding of the Church's mission to all segments of society--particularly to those underrepresented and on the margins of history.

Published in English for the first time in their entirety and with contextual annotations, this volume collects the Pope's homilies and speeches from 1999 to 2004--the first of a three-volume translation

The homilies and public lectures in this volume introduce us to the serious but also lighthearted intellectual background of the first Jesuit pope and the first Pope to bear the name of Francis of Assisi. This Franciscan-crossed Jesuit has much to teach us.--Patrick J. Ryan, S.J.These homilies and speeches, delivered from 1999-2004, show Pope Francis' unique style of leadership. With a gift of oratory, he has introduced a different way of living the pontificate and intensely renewed people's relationship with faith.

Leave Behind Nostalgia and Pessimism and Open the Way to Our Thirst for Encounter - 5
Homily, Solemn Te Deum on Independence Day--May 25, 1999

Remembering the Father Is Not Just Another Memory - 11
Homily, Solemnity of Corpus Christi--June 5, 1999, Year A

God, Our Father, Please Heal Her - 13
Homily, Meeting of Politicians and Legislators from Latin America-- August 3, 1999

Educating in the Culture of Encounter - 17
Position Paper on Education at the Headquarters of the Christian Business Association--September 1, 1999

Consecrated Life Makes Sense Only in Light of Fruitfulness - 26
Homily, Mass with Consecrated Men and Women--September 8, 1999

To Govern Is to Serve Each One of These Brothers - 34
Homily, Solemn Te Deum for New National Authorities--December 11, 1999 (Transcript)

Keeping Our Feet on Earth to Avoid Losing the Way to Heaven - 43
Message to the Educational Community--March 29, 2000

Educating in Peace and Hope - 58
Homily, Mass for the Education Vicariate--March 29, 2000 (Transcript)

For a Millennium of Justice, Solidarity, and Hope - 69
Homily, Shrine of Saint Cajetan--August 7, 2000

In Every Encounter There Is a New Story at Play - 71
Jubilee Celebration for Educators--September 13, 2000

Help Us Find Jesus in Each Other - 73
Homily, Twenty-Sixth Youth Pilgrimage to Luján--October 1, 2000

May Our Priesthood Make the Faithful People of God Feel That the Church Loves Them - 93
Homily, Chrism Mass--April 12, 2001, Year C

Whoever Wishes to Be Great Among You Shall Be Your Servant - 98
Homily, Solemn Te Deum on Independence Day--May 25, 2001

The Word Seemed Already to Wipe Away Our Tears - 111
Homily, Shrine of Saint Cajetan--August 7, 2001

The Human Dimension Is Key to the Sociopolitical Task - 114
Spontaneous Remarks at Archdiocesan Days for Social Ministry--December 13, 2001 (Transcript)

Remember How Your God Has Directed All Your Journeying - 153
Homily, Solemnity of Corpus Christi and Consecration of Buenos Aires to Our Lady of Luján--June 1, 2002, Year A

"The Lord, Your God, Shall You Worship and Him Alone Shall You Serve" - 156
Letter to Catechists--August 2002

Communicator, Who Is Your Neighbor? - 162
Keynote Address, Third Congress of Media Personnel--October 10, 2002

Let Us Not Be Disheartened--We'll Find the Way to Start Over Again - 216
Homily, Shrine of Saint Cajetan--August 7, 2003

"The People Who Walked in Darkness Have Seen a Great Light" - 222
Homily, Christmas Mass during the Night--December 24, 2003, Year C

Enter the Light Because the Truth Is There - 257
Homily, Education Mass--April 21, 2004, Wednesday, Second Week of Easter, Year C (Transcript)

Let's Be Quiet in Our Hearts and Be Accountable for Our Brothers and Sisters - 279
Remarks, Selichot Service in Preparation for Rosh Hashana at the
Synagogue on 2049 Vidal Street--September 11, 2004

It Is Possible to Be Holy - 281
Closing Presentation at the Congress on Veritatis splendor--September 25, 2004

The Existence of the Pastor Is Expressed in Dialogue - 290
Homily, Funeral Mass for Cardinal Juan Carlos Aramburu, Archbishop Emeritus of Buenos Aires--November 22, 2004

Jesus Already Warned Us That These Things Would Happen, and He Told Us Not to Be Afraid - 291
Letter to Consecrated Men, Women, and the Faithful--December 1, 2004

Pope Francis was born in Flores, Buenos Aires, Argentina, on December 17, 1936, entered the Society of Jesus at age twenty-one, and was ordained in 1969 with a degree in philosophy. He became auxiliary bishop of Buenos Aires in 1992, archbishop in 1998, and cardinal in 2001. He was elected as the first Jesuit pope on March 13, 2013.

Antonio Spadaro, S.J., is editor of the review La Civiltà Cattolica and teaches at the Pontifical Gregorian University.
Patrick J. Ryan, S.J., is the Laurence J. McGinley Professor of Religion and Society at Fordham University.

Marina A. Herrera (translator) is co-editor, translator, and writer for La Fe Viva, daily biblical devotions for Creative Communications for the Parish.

I Will See You in Heaven

Still Unhealed Treating the Pathology in the Clergy Abuse Crisis