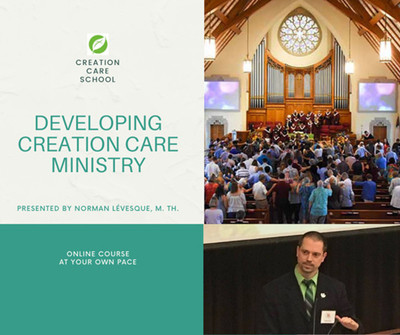 Online video course • Approximately 4-6 hours • Comes with a license to use with your whole parish, school, or organization

How can I help my church better care for Creation?

At the end of this course, you will be able to:

Norman teaches with passion, gentleness and respect, caring about each student. The lessons are very well prepared, the content is very rich and varied.

Professor Norman Lévesque was very inspiring, competent, respectful and passionate with a nice touch of humour. Thanks to him, I reinforced my conviction that we are guardians of creation and not dominant owners of our beautiful blue planet.

NORMAN LÉVESQUE, M.Th., has been a lecturer on Creation Care since 2005. He holds a Master's degree in practical theology, and his thesis was on Creation Care as a new ministry in the Church. He is the founder of the Green Churches Network in Canada. He has worked as a diocesan animator for Creation Care Ministry in the Diocese of Saint-Jean-Longueuil (South Shore of Montreal, Canada). He received an honorable mention from the Diocesan Order of Merit in 2007. He wrote the practical guide Greening Your Church (Novalis 2014) and he co-authored the book Les pages vertes de la Bible (Novalis, 2011) with David Fines.

He is also a science educator, formerly a science teacher. He holds a graduate degree in Atmospheric Science from the Université du Québec à Montréal (UQAM, 2008). He works as a scientific educator in an environmental museum.

Ecology and the Bible