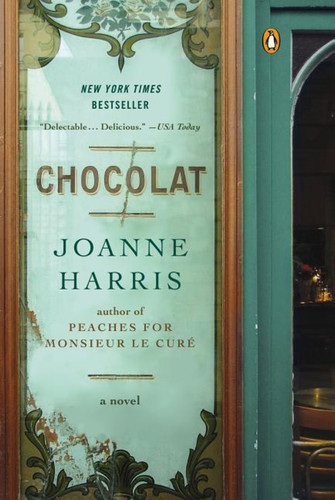 Even before it was adapted into the Oscar-nominated film starring Juliette Binoche and Johnny Depp, Joanne Harris' New York Times bestselling novel Chocolat entranced readers with its mix of hedonism, whimsy, and, of course, chocolate.

Just a few days before Lent, a flamboyant woman and her daughter open a chocolate shop in a small French town and create a stir with their seemingly magical sweet-treat remedies for life's problems. A young widow opens a chocolate shop in a French village, transforming its normally austere inhabitants into unabashed sensualists. The event coincides with Lent, and the villagers' rejection of traditional self-denial angers the parish priest who declares war.

When beautiful, unmarried Vianne Rocher sweeps into the pinched little French town of Lansquenet on the heels of the carnival and opens a gem of a chocolate shop across the square from the church, she begins to wreak havoc with the town's Lenten vows. Her uncanny ability to perceive her customer's private discontents and alleviate them with just the right confection coaxes the villagers to abandon themselves to temptation and happiness, but enrages Pere Reynaud, the local priest. Certain only a witch could stir such sinful indulgence and devise such clever cures, Reynaud pits himself against Vianne and vows to block the chocolate festival she plans for Easter Sunday, and to run her out of town forever. Witch or not (she'll never tell), Vianne soon sparks a dramatic confrontation between those who prefer the cold comforts of the church and those who revel in their newly discovered taste for pleasure.

Hailed as "an amazement of riches few readers will be able to resist" by The New York Times Book Review, Chocolat is a timeless and enchanting story about temptation, pleasure, and what a complete waste of time it is to deny yourself anything.

Accomplished and delectable... Few readers will be able to resist.

Gourmand Harris's tale of sin and guilt embodies a fond familiarity with things French that will doubtless prove irresistible to many readers.

As sweet, rich and utterly satisfying as a fine truffle. Dieters beware: Ms. Harris's lush prose drips with mouth-watering descriptions of cocoa confections that could melt even the most resolute of wills.

Vianne is a magnet for the town's misfits... Vianne gives them chocolate, but also nudges their lives in the right direction... Clearly, chocolate stands for human kindness and consolation. ... Jaunty, hopeful and endearing.

You find yourself unable to stop until you've finished feasting on this delightful, quirky, sensuous story. This is also a feelgood book of the first order... so full of colour, tastes and scents, that as you are lured by the plot and the wonderful descriptions, your senses are left reeling. This novel is a celebration of pleasure, of love, of tolerance. Read it.

Joanne Harris is the author of the Whitbread Award-nominated Chocolat (made into an Oscar-nominated film starring Juliette Binoche and Johnny Depp) and eleven other bestselling novels. She plays bass guitar in a band first formed when she was sixteen, is currently studying Old Norse and lives with her husband and daughter in Yorkshire, England .

Women of the Passion A Novel

St. George and the Dragon And the Quest for the Holy Grail