Lord of the World A Novel 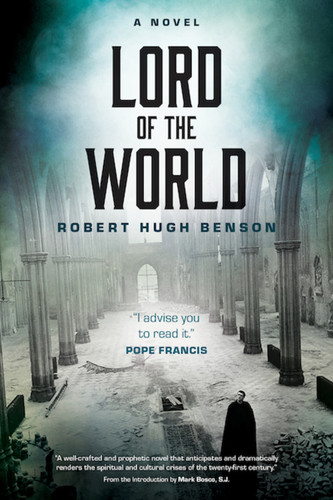 Lord of the World: A Novel

In an airplane news conference on his return from the Philippines in January 2015, Pope Francis mentioned Robert Hugh Benson’s Lord of the World and said, “I advise you to read it.” It wasn’t the first time the Holy Father had praised the book since becoming pope. This 1907 futuristic narrative has been hailed as the finest work of this unsung, but influential author and son of the Archbishop of Canterbury whose conversion to Catholicism rocked the Church of England in 1903. The compelling book includes a new introduction, a biography of Benson, and a theological reflection.

Popular young adult books such as The Hunger Games and Divergent, as well as literary classics such as Walker Percy’s Love in the Ruins and Cormac McCarthy’s The Road, have created a growing interest in dystopian novels. In one of the first such novels of the twentieth century, Robert Hugh Benson imagines a world where belief in God has been replaced by secular humanism. Lord of the World describes a world where Catholics are falling away and priests and bishops are defecting. Only a small remnant of the faithful remains. Julian Felsenburgh, a mysterious and compelling figure arises, promising peace in exchange for blind obedience. Those who resist are subjected to torture and execution. Soon the masses are in Felsenburgh’s thrall and he becomes leader of the world. Into this melee steps the novel’s protagonist, Fr. Percy Franklin. Dauntless and clear-sighted, Franklin is a bastion of stability as the Catholic Church in England disintegrates around him. Benson’s harrowing plot soon brings these two charismatic men into a final apocalyptic conflict.

With an imagination to rival H. G. Wells and theological insight akin to G. K. Chesterton, Benson’s astute novel has captured the attention of many today, including Popes Benedict and Francis. This new edition makes it easily available and features an insightful introduction by Rev. Mark Bosco, S.J., a brief biography of Benson by Martyn Sampson, and a theological reflection by Rev. Michael Murphy, S.J.

I advise you to read it.

"A well-crafted and prophetic novel that anticipates and dramatically renders the spiritual and cultural crises of the twentieth-first century.

From the introduction by Rev. Mark Bosco, S.J.

Prophetic wisdom is often best expressed and appreciated through works of art. Lord of the World is just such a prophetic work of art. The book tells certain critical truths: that evil is at work in our time, that lies embed seeds of destruction in the promise of peace, and that Jesus Christ is victorious through the indignation and suffering of the Cross. Lord of the World is the right book for Christians in the modern world—and there may be no message more critical for our time."

Benson’s dystopic novel is more sinister than the simple hedonism of Huxley’s dystopia and more subtle than the sheer brutality of Orwell’s. I welcome Ave Maria Press’s new edition of this classic and prophetic work.

By including both a fresh, context-clarifying introduction to Robert Hugh Benson and his dystopian tale and an invaluable meditation on the theology that drives it, Ave Maria Press gives us a relevant and readable edition of a harrowing 1907 novel that, in places, seems all too familiar and timely.

Lord, Teach Us To Pray Sermons on The Lord’s Prayer

Look! A Child's Guide to Advent and Christmas

Lord Willing? Wrestling with God's Role in My Child's Death

Living Thoughtfully, Dying Well A Doctor Explains How to Make Death a Natural Part of Life