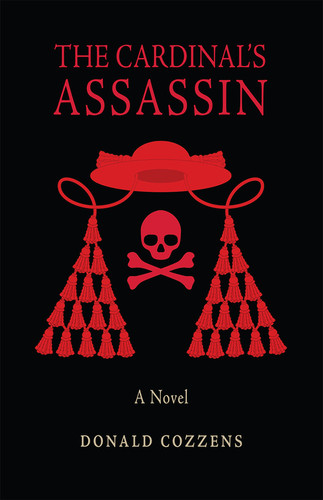 When in Rome, do as the Romans do…BEWARE

Giorgio Grotti is capable of evil. No question about that. Whether he will succeed in assassinating a Prince of the Church is the question in point. In Donald Cozzens’ most recent book in his award-winning Bryn Martin murder mystery series, the newly minted Cleveland prelate finds himself in Rome to witness his friend and mentor Charles Cullen, the archbishop of Baltimore, being elevated to the cardinalate, the highest honor but one in the Roman Catholic Church.

Both men wander into traps set by Grotti, a former sharpshooter for the Carabinieri and now the hit man for an ultra-conservative Catholic cabal. Martin, a natural sleuth with two previous brushes with Grotti, tries to protect his family and friends. When the assassin turns rogue, however, none can consider themselves safe—not withstanding unlikely help from the Italian Mafia.

Praise for The Cardinal’s Assassin

“Donald Cozzens tells a riveting story of intrigue, subterfuge, and murder, set in the context of a modern Vatican Consistory of Cardinals. He carries his readers through numerous unpredictable twists and turns in a well-managed narrative that moves at a crisp pace through to the final pages.” — Chris McDonnell, retired headteacher, poet, and weekly columnist for the Catholic Times (UK and Ireland)

“In this provocative thriller, Donald Cozzens exposes both corruption of the soul and the soul’s desire for redemption—in unanticipated characters and foreign places. With its engaging historical detail and gripping plot, The Cardinal’s Assassin is highly readable, highly relevant, and highly recommended.” — Rick Porrello, author and screenwriter, To Kill the Irishman

“On some rainy day, find a comfortable fireside chair and escape into the dark world of extremist Catholic clergy bound by their righteous determination to purge the church of theological unorthodoxy. Donald Cozzens uses his cast of memorable characters from mafia dons to Vatican II reformers to Nazi-sympathizing members of the curia to mix contract murder, hierarchical corruption, sexual conflict, and an unlikely spiritual awakening into a frighteningly plausible tale.” — Frank J. Butler, author, Belonging: One Catholic’s Journey

Donald B. Cozzens is writer in residence at John Carroll University. He is a Catholic priest who has served as vicar for clergy and rector of a seminary among other assignments. Cozzens has been described as “a frank and insightful voice of reason” for his many books and international lectures where he argues persuasively that transparency and candor, not secrecy and silence, are the first steps toward a more humble, healthy, and credible Church.

This is the third installment by Donald Cozzens in a series featuring Bryn Martin, a priest from Baltimore who recently has been named bishop of the Diocese of Cleveland. The first two novels in the series, Master of Ceremonies and Under Pain of Mortal Sin were both awarded first place for novels in the Catholic Press Association’s annual book awards.

Looking For the King An Inklings Novel

Born to Fly An Infant's Journey to God

How to Raise Money for Community Organizing

Lessons Learned Stories from a Lifetime of Organizing

Mixing It Up in the Public Arena

Girl with the Green Hair

Reveille for a New Generation Organizers and Leaders Reflect on Power

Raising Money for Your Congregation