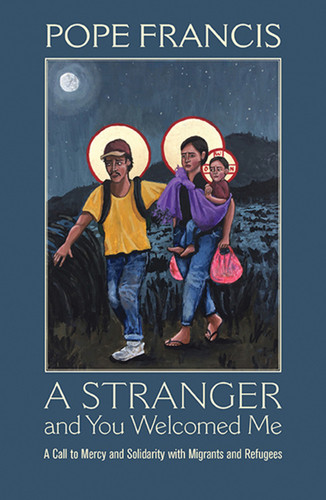 A Stranger and You Welcomed Me (softcover): A Call to Mercy and Solidarity with Migrants and Refugees

title:
A Stranger and You Welcomed Me
subtitle:
A Call to Mercy and Solidarity with Migrants and Refugees

“Solidarity, this word that frightens the developed world. People try to avoid saying it. Solidarity to them is almost a bad word. But it is our word!”—Pope Francis

The plight of migrants and refugees has been a constant and urgent priority for Pope Francis. On his first trip outside of Rome to the Island of Lampedusa, a waystation for refugees in the Mediterranean, he spoke of the many who have drowned: “We are a society which has forgotten how to weep, how to expe­rience compassion . . . the globalization of indif­ference has taken from us the ability to weep!”

In this collection of his writings and sermons, Pope Francis frequently reminds us that Jesus and his parents were refugees in Egypt. He calls on everyone to understand the root causes of the mass movement of people, and to act with compassion and solidarity in response to their sufferings, remembering Jesus’s words: “What you have done to the least of my brothers, you have done to me.”

Peek inside!
Written by Pope Francis
×

Made for Mission Renewing Your Parish Culture