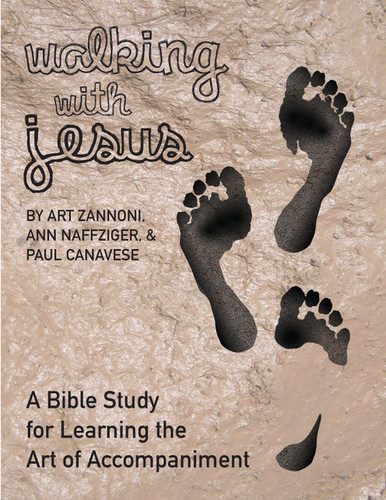 Walking with Jesus (eResource): A Bible Study for Learning the Art of Accompaniment

Throughout his pontificate, Pope Francis has been speaking about how important it is for the church to accompany people through their challenges and struggles. This is more than just “being with” people. It entails deeply listening to them, supporting them, and helping them listen to how God is working in their lives. When we accompany others, we help them discern how God is leading them.

The purpose of this Bible study is not to explain Pope Francis’ approach to accompaniment, but to instead offer a process for learning more about accompaniment from Jesus’ example in the Gospels.  This is a perfect follow-up to studying Bill Huebsch's The Art of Accompaniment.

Ann Naffziger has her MDiv from the Jesuit School of Theology and MA in Biblical Languages from the Graduate Theological Union, both in Berkeley.  Ann has worked in a variety of parish roles, as well as serving as a hospital chaplain, spiritual director, scripture instructor, and lecturer at the Jesuit School of Theology at Santa Clara University. She has written articles in the field of spirituality and scripture for America, BustedHalo.com, Commonweal, The National Catholic Reporter, Spiritual Life: A Journal of Contemplative Spirituality, and other publications. She is also a Master Gardener and girls' softball coach.

Threshold Bible Study series Pilgrimage in the Footsteps of Jesus

Walking in Valleys of Darkness A Benedictine Journey through Troubled Times