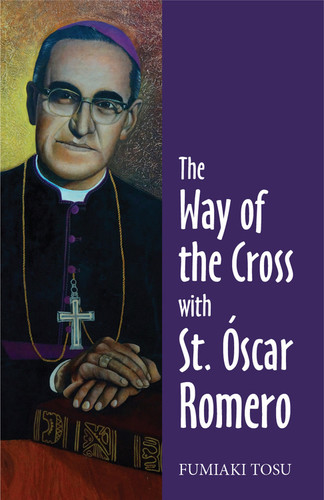 Available in both English & Spanish

Lead your people in the Stations of the Cross with the powerful words and example of newly canonized St. Óscar Romero!

In his homily for the canonization mass of Saint Óscar Romero, martyr and Archbishop, Pope Francis drew attention to Romero’s “courageous choice to risk everything to follow” Jesus. Each peasant he befriended, each homily he gave, each act of violence he denounced brought him closer to the cross, until, on March 24, 1980, Óscar Romero was killed by an assassin’s bullet.

We, too, are called to approach the cross--to declare with our words and our lives that we stand with those who today are being crushed by the forces of greed and violence. These meditations on the Stations of the Cross are meant to lead us to the foot of the cross, not only the literal cross adorning a beautiful (but safe) sanctuary, but the suffering of people and the planet today.  Saint Óscar Romero, pray for us.

Peek inside!
Written by Fumiaki Tosu

Fumi Tosu has taught Religious Studies and Social Justice in high school and college. He is a member of the Catholic Worker movement and is a popular speaker on nonviolence and spirituality. He received his Master of Divinity degree from the Jesuit School of Theology at Berkeley.

Everyone's Way of the Cross

Praying the Stations series Stations of the Cross for Today's Disciples