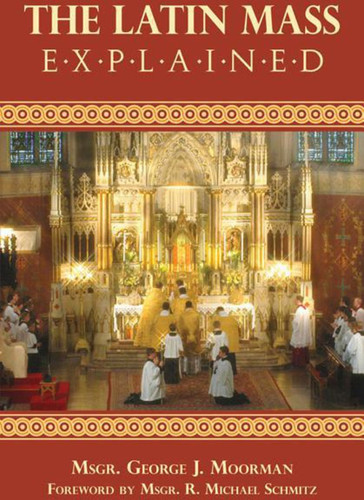 Everything needed to understand and appreciate the Traditional Latin Mass.

Extremely informative, yet very easy to read! Explains, prayer by prayer, what happens at the Latin Mass and why. Answers all your questions about the Mass: why Latin is used, silence, bells, specific colors, etc., and how we participate. Ties in beautifully with Pope Benedict XVI's motu proprio opening the door to the universal celebration of the Latin Mass.

The Latin Mass Explained was originally published in 1920 by Our Sunday Visitor Press, upon which it received the Nihil Obstat and Imprimatur. TAN reprinted the book with new material in 2007.

[The Latin Mass Explained]...will be part of the liturgical revival which the Church so ardently hopes for through the voice of the Roman Pontiff

Msgr. George J. Moorman was born in 1883 at Indiana, where he spent the majority of his life. He was ordained a priest on the thirteenth of June, 1908, by Bishop Herman J. Alerding at the Cathedral of the Immaculate Conception. He remained a priest for over seventy years, serving as an editor of Our Sunday Visitor and an army chaplain during the first World War. Father Moorman died in 1979 at the age of 95.

Child's Guide to the Mass

Remember Your Death A Lenten Devotional

Heavenly Friends An Introduction to the Beauty of Icons

Gather Us In - Just for Lent Tools for Forming Families

God Knows You're Grieving Things to Do to Help You Through