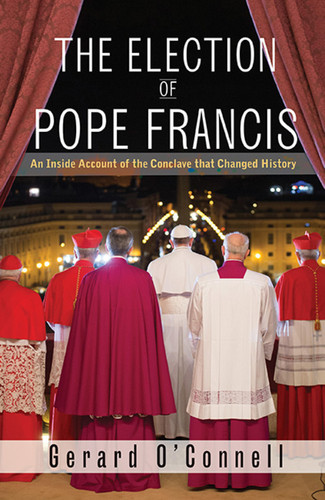 The Election of Pope Francis: An Inside Account of the Conclave That Changed History

SKU:
UPC:
Availability:
Already in second printing. Available by early May.
subtitle:
An Inside Account of the Conclave That Changed History
hardcover:
true
title:
The Election of Pope Francis
pricing:
$22.40

The selection of Cardinal Jorge Bergoglio of Buenos Aires in the papal election of 2013 made history in several ways:  he was the first Latin American, the first Jesuit, and the first pope to choose the name Francis. But these “firsts” were only the beginning of a consequential papacy of historic proportions. Entering the conclave of 2013, Cardinal Bergoglio appeared on few lists of likely candidates. How then did his election come about?

Written by a top Vatican journalist, this book is an inside, day-by-day account of the process that began with Pope Benedict XVI’s surprising decision to retire and continued up to Pope Francis’s election and installation. Gerard O’Connell and his wife—herself a Vatican correspondent from Argentina—had befriended Bergoglio years before and were among the very few journalists who predicted his election. Now, relying on extensive inside sources, he reveals the basis for that confidence and shares with us what actually happened inside the secret conclave.

Peek inside!
Written by Gerard O’Connell

Gerard O’Connell is an associate editor and Vatican correspondent for America magazine. He has covered the Vatican since 1985, reporting for a number of English-speaking news outlets, including The Tablet (UK), Our Sunday Visitor, The National Catholic Reporter, and Inside the Vatican. He is the author of Do Not Stifle the Spirit: Conversations with Jacques Dupuis (Orbis).