Before Margaret Met the Pope A Conclave Story 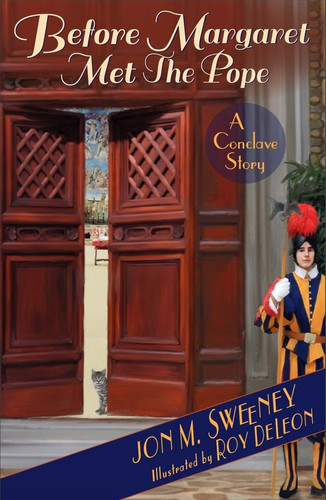 Before Margaret Met the Pope: A Conclave Story

"Before Margaret met the Pope, she lived on the streets of Rome. She was a small cat in one of the busiest, most crowded, cities in all Europe. Rome is the capital of Italy. Rome surrounds Vatican City, the world’s tiniest country, and home to the Pope, the Curia, and the Swiss Guard." So begins this fifth adventure in the lives of Margaret and the Pope.

A prequel, this episode tells of the conclave that elected the Pope who would one day meet Margaret on the Via della Conciliazone. It turns out, Margaret was somehow there, watching, in the Sistine Chapel as the votes were cast.

Children and adults alike will delight in this behind-the-scenes story about love and the Church, learning not only about what popes do, but this time, how popes are chosen.

Jon M. Sweeney’s popular history, The Pope Who Quit, was optioned by HBO. In addition to The Pope’s Cat series for children, he’s the author or translator of many other books including The Complete Francis of Assisi, and Francis of Assisi in His Own Words: The Essential Writings, often used in classes, book groups, and for individual study by people around the world wanting to know more about St. Francis of Assisi. Jon lives in Milwaukee with his wife, daughters, and cats.

Roy DeLeon is an Oblate of St. Benedict, a spiritual director, a workshop facilitator focused on creative praying, an Urban Sketcher, and a professional illustrator. In addition to illustrating The Pope's Cat series, he is also the author of Praying With the Body: Bringing the Psalms to Life. He lives in Bothell, Washington, with his wife, Annie.

Pope Francis Takes the Bus, and Other Unexpected Stories