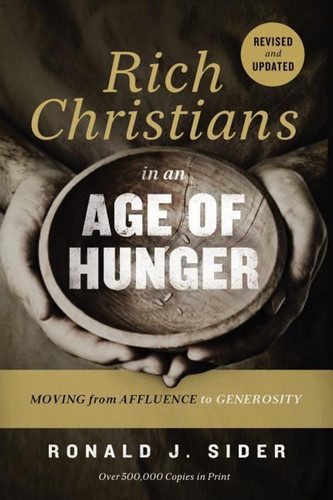 Rich Christians in an Age of Hunger: Moving from Affluence to Generosity

When Ron Sider's Rich Christians in an Age of Hunger first appeared almost forty years ago, it shook readers to the core. Informed about the issues of world hunger and poverty, they could no longer ignore the plight of their global neighbors. This thoroughly revised edition of Sider's bestselling book outlines the progress that has been made in the last four decades--and the work that is still left to do. Every day 18,000 children under five still die of starvation and preventable diseases, and more than a billion people live in relentless, unrelieved poverty worldwide. Why is there still so much poverty? Conservatives blame sinful individual choices and laziness. Liberals condemn economic and social structures. Who is right? Who is wrong? Both, according to Sider, who explains poverty's complex causes in this new edition and offers concrete, practical proposals for change.

Do you want to make a true difference in the world? Dr. Ron Sider does. He has, since before he first published Rich Christians in an Age of Hunger in 1978. Despite a dramatic reduction in world hunger since then, 34,000 children still die daily of starvation and preventable disease, and 1.3 billion people, worldwide, remain in abject poverty. So, the professor of theology went back to re-examine the issues by twenty-first century standards. Finding that Conservatives blame morally reprehensible individual choices, and Liberals blame constrictive social and economic policy, Dr. Sider finds himself agreeing with both sides.

In this new look at an age-old problem, he offers not only a detailed explanation of the causes, but also a comprehensive series of practical solutions, in the hopes that Christians like him will choose to make a difference.

The Little Book of Christian Mysticism

Rivers of Sorrow, Currents of Hope

Room 24 Adventures of a New Evangelist

Retreats Deepening the Spirituality of Girls