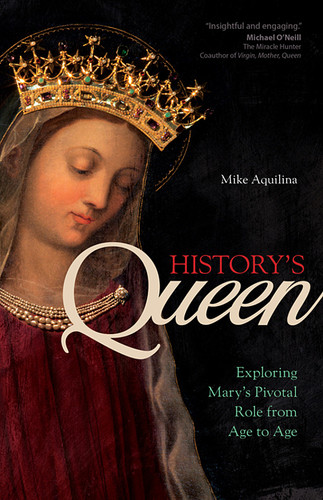 The Virgin Mary’s part in history doesn’t begin and end with her yes to God. Popular Catholic author Mike Aquilina points out that Mary is at the center of history from creation to the end of time and everywhere in between. In History’s Queen, you’ll learn about the many ways the mother of humanity has left her mark on the great events of time, not only as we see them in the Bible, but also in pivotal events such as Fatima, the battle of Lepanto, and the plague.

In this journey through two thousand years of Mary’s active participation in world events, each chapter of History’s Queen highlights a Marian intervention that is emblematic of a particular era, and opens our eyes to the ways in which Mary provides a vital key for understanding both our past and our future.

Mike Aquilina—author of The History of the Church in 100 Objects and editor of the Reclaiming Catholic History series—provides a fresh, fascinating, and classical view of history to today’s readers, exploring:

Peek inside!
Written by Mike Aquilina

“Drawing on Scripture, Catholic tradition, popular devotion, and some of the most significant moments of Mary’s miraculous intercession, Mike Aquilina’s insightful and engaging History’s Queen provides us with an opportunity for deepening our love for the Mother of God and growing our understanding of Mary’s unique role in salvation history.”

“Impressive.”“A very impressive book that is much needed in our time.”

“In History’s Queen Mike Aquilina deftly disentangles the various threads by which God wove Mary into the story of his Incarnation and love. It is a story that has delighted and challenged Christians from Genesis to Revelation and from antiquity to the present day, here told with sensitivity to its scriptural roots and its significance for how Christians define themselves through devotion to Mary as the Mother of God.”

Rachel Fulton Brown, Associate Professor of History, The University of Chicago, Author of Mary and the Art of Prayer

Prayers from Around the World and Across the Ages

Bless Us, O Lord A Family Treasury of Mealtime Prayers

Oremus A Treasury of Latin Prayers with English Translations

Sex and the Spiritual Life Reclaiming Integrity, Wholeness, and Intimacy

Christ in the Storm An Extraordinary Blessing for a Suffering World

Meeting Jesus through the Jesse Tree Stories and Activities for Advent