Pistaco A Tale of Love in the Andes 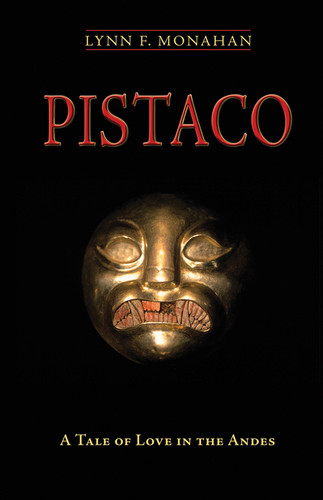 Pistaco: A Tale of Love in the Andes

subtitle:
A Tale of Love in the Andes
paperback:
true
min:
$14.97
title:
Pistaco

Steven McMahon, a young American struggling to reconcile his priestly vocation with his very human desire for love and intimacy, flees to Peru on mission, seeking the serenity he cannot find at home. In a tiny village in the Andes Mountains he meets a young school teacher chased by demons of her own. They soon find themselves trapped between the brutal Shining Path guerrillas who threaten mayhem across the mountain countryside and a harsh military counter-insurgency trying to quash the rebellion. Amid this historic struggle between the forces of order and ungodly acts of terror, and haunted by the legend of el pistaco, a mythical fiend believed by locals to feed on the unwary, they discover the meaning—and the price—of love.

“Reminiscent of the finest Graham Greene novels, this beautifully written and compelling story thrusts us into an indigenous Andes culture and ultimately into the heart of faith, which is to find God in our human imperfections and the mysteries of daily life.” — Judith Valente, author of Atchison Blue: A Search for Silence, a Spiritual Home and a Living Faith and The Art of Pausing: Meditations for the Overworked and Overwhelmed

"A more literary offering comes from In Extenso Press, an imprint of Catholic publisher ACTA Publications. Pistaco: A Tale of Love in the Andes by Lynn F. Monahan (May) is a debut novel releasing simultaneously in hardcover, paperback, and e-book. Says ACTA publisher Greg Pierce, “Unlike many novels published for the Catholic trade, Pistaco is aimed at the broad general literary market for suspense stories set in exotic locations,” in this case 1980s Peru during the time of the Shining Path guerilla uprising. An American priest and a Peruvian school teacher meet and fall in love amid the violent struggle between the army and the rebels; they are shadowed by the threat of el pistaco, a mythical fiend the villagers believe feeds on people. Says Pierce, “The story illuminates tensions between Catholicism and indigenous religion, power and justice, and celibacy and intimacy.”

"The book title belies the universality of its content. Centered in an Andean mountain village besieged by the looming presence of death and desire, the story exemplifies Carl R. Rogers’ belief, “What is most personal is most universal.” [On Becoming a Person: A Therapist’s View of Psychotherapy.]

This is far more than a novel of love and terror. It exceeds the poignancy of a priest’s struggle with mandatory celibacy and a young woman’s fear of being unacceptable because of her physical disability. This is a tale of humanity’s descent into a hell of its own construction as well as a heaven which seems always slightly out of reach. It is a parable of care and concern commingling with fear, frustration, and futility. It is the interweaving of religion with religiosity and the interplay of those who desire to help and those who are leery of the cost connected with the assistance. The reader is offered an opportunity to enter life with all its terrifying reality.

At the same time, there is an invitation to examine motivations, to evaluate critically and analyze one’s own assessment of self. Fr. Steven McMahon is forced by circumstance to enter that territory. The reader is equally encouraged to begin an examination of one’s own dreams and desires, especially noting how they “falter between vision and reality”.

The book opens and closes on the theme of crucially authentic ministry offered in myriad ways all of which are teaching and learning experiences. Cori teaches. Steven offers the traditionally understood sacraments. Angel leads with laughter, caution, and profound commitment. In flight from the violence of comfortable living, all do so in “a land nobody wants” with “people nobody wants”. The emerging result is a recognition that safe choices are quickly disappearing. “Making a new life means letting go of the old one.” It also demands more listening than speaking, more learning than teaching, more understanding than criticizing, more inclusion and less exclusion.

At its core, life in the Peruvian Andes is no different than life anywhere on the planet. Ministry everywhere is needed, Cori recognizes the reality in her vocation as teacher. Steven is taught it cannot be “just some gringo coming to deliver sacraments like so much cargo.” Mingle church teaching with folklore and “maybe you get somehow that much closer to God”. To find God where God is lurking is to discover God lurking everywhere, in surprising places and people.

The lesson is not lost in the mountains or plains but found in the secret places of the human heart. There a God is discovered who freely gives us time, space, capability and courage to deal with difficulties and clarify our calling. There a frighteningly exciting unveiling occurs. “What has gone wrong here is something only we [humans] can fix. Blessings return with balance. Heaven and hell are here and now.”

This book is not limited to the expression of an ideology, theology, philosophy, or psychology. It is a voyage into fearsome faith. It is faith fraught with resolute commitment while flailing in the arms of doubt and denial. It is faith in life given, received, shared, and ultimately released. To paraphrase the words of a present day ponderer, it is a tale well told “not of sinners in the hands of an angry God but of God in the hands of angry sinners”.

Simply written with profound poignancy, it is read with tearful comprehension and heartfelt hope that Gethsemene’s garden agony lived now is indeed prelude to resurrection—yesterday, today, and tomorrow.

The pistaco of devilish imperfection can also open portals of prayerful living and profound loving. Hand-in-hand, love and terror walk us into life newly understood. In the end, love abides. There is power in that kind of passionate living."

LYNN F. MONAHAN is a writer and editor who has written for newspapers, newswires, and magazines. He has traveled widely, especially in Latin America, and lived in Peru during much of the 1990s, an experience that inspired Pistaco. Currently a US-based journalist, Monahan has written award-winning stories from four continents about people who live on the margins of what we dub “civilization.” A Connecticut native, he graduated from Syracuse University and holds a master’s degree in writing from Manhattanville College. He and his wife have two daughters and live in Westchester County, New York.

Elijah at the Wedding Feast and Other Tales

The Tale of the Drowsy Shepherd A Christmas Musical for Children

The Tale of Three Trees A Traditional Folktale

Please Pass the Faith The Art of Spiritual Grandparenting

Poems And Prayers For Easter