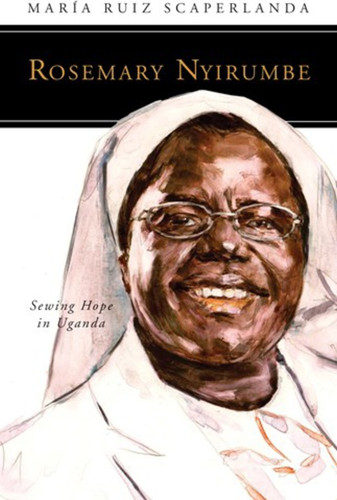 Sister Rosemary Nyirumbe's 62 years of life provide a powerful testament to God's presence, love, and hope amidst unimaginable violence. Throughout these many years, her native Uganda and southern Sudan (now South Sudan) have suffered the devastating effects of war and military clashes. Children, as the most vulnerable population, have suffered the most-being orphaned, kidnapped, forced to become child soldiers and sex-slaves. In Rosemary Nyirumbe: Sewing Hope in Uganda María Ruiz Scaperlanda brings to light Sister Rosemary's vocation of loving presence to these youth in the midst of this cultural and societal obliteration.

As a Sister of the Sacred Heart of Jesus for over 45 years, Sister Rosemary, even at great risk to herself, continues to minister to children enduring the violence around them, teaching practical skills, while helping them to heal, forgive, and hope. Her work taking in girls escaping captivity by Joseph Kony and his Lord's Resistance Army (LRA) has earned her international recognition. She has been named one of TIME magazine's "100 Most Influential People in the World," is the subject of the book Sewing Hope, and an award-winning documentary by the same name narrated by Academy Award winning actor Forest Whitaker. She received the United Nations Women's Impact Award and has been named a CNN Hero.

A compelling read, this book brings to life the love and reverence displayed by a resilient servant of God and perhaps will inspire readers to examine their own faith and see God in all people and every situation.

This small book is a moving introduction to the life and work of Sister Rosemary Nyirumbe who has been called the "Mother Teresa of Africa". Be prepared to be inspired by the joy, the faith, the motherly love and indomitable spirit of this woman who has had such impact in the lives of young African women and girls who were victims of one of the most horrific atrocities of our time. It is a testament to hope and healing.

As an introduction to the problems of Uganda and one noble and courageous response, this book is recommended.

A riveting account of the woman described as Africa's Mother Teresa, Maria Ruiz Scaperlanda's biography of Sr. Rosemary Nyirumbe captures the hope she brought to war-torn northern Uganda with a tender, tough and tenacious love. Scaperlanda beautifully shows the connection between providence, prayer, and action in depicting Sr. Rosemary's work with young women who suffered terrible harm at the hands of Joseph Kony and his Lord's Resistance Army. Sr. Rosemary shows us what faith does in the face of despair.

James Martin, SJ, Author of In All Seasons, For All Reasons: Praying Throughout the Year

The life of Sacred Heart sister Rosemary Nyirumbe is lovingly told in Maria Ruiz Scaperlanda's fascinating biography. By providing the historical and geographical context of Catholicism in Uganda and the continuing threat of the deadly political situation of endless revolution of our own times, Scaperlanda opens a window on the children of war and a woman who continues to give her life to heal them through care, education and vocational training. This is a book of living love and hope about a woman who on occasion defied the warlord Joseph Kony's men but remains, to this day, terrified of caterpillars. Scaperlanda writes with energy and the enthusiasm that reflects Sr. Rosemary's heart, her very habit of being.

Despite Sister Rosemary having been named as one of Time Magazine's 100 Most Influential People in the World in 2014, there are still many who don't know the story of this remarkable woman who is so totally dedicated to the poorest among us. Scaperlanda's book fills that gap with a masterful weaving of the heartbreaking history of Uganda with moving stories of her subject that demonstrate the power of hope, of faith, and of love. And, as always, Scaperlanda writes in a way that makes readers feel they are right there with Sister Rosemary, whether it be riding in a bumpy Land Cruiser, building a brick wall, or embracing the girls in her care.

Susan J. Stabile, Spiritual director, retreat leader and author of Growing in Love and Wisdom (OUP 2013), and Distinguished Senior Fellow at the University of St. Thomas School of Law in Minneapolis

Where there is great evil, there is often greater good to be found, if we could only see it. Maria Scaperlanda's moving account of Sister Rosemary Nyirumbe's work in Uganda is a powerful testament to a diminutive Sister with the heart of a lioness. Sister Rosemary has faced down great evil with greater faith while rescuing the victims of one of Africa's most cruel conflicts. Rosemary Nyirumbe: Sewing Hope in Uganda is a story of hope for all Christians and a moving testimony to the witness of the Church in East Africa, a modern-day cradle of martyrs and saints-in-the-making.

This is another gem of a biography in the Liturgical Press's series, People of God. Rosemary Nyrirumbe: Sewing Hope in Uganda is an incredible story of love, courage, motherly devotion, faith and a great openness to God's calling.

In Rosemary Nyirumbe: Sewing Hope in Uganda, Maria Ruiz Scaperlanda invites us into the compelling story of a true saint-in-the-making. By journeying alongside Sister Rosemary, we learn the history of a people, witness the courage and conviction of a leader, and discover the compassion and ingenuity necessary to truly respond to Christ's call to walk alongside those most in need. Read this book not only to understand but to be inspired along your own path to live the Gospel.

Lisa M. Hendey, Founder of CatholicMom.com and author of The Grace of Yes

Maria Scaperlanda's intimate portrait of Sr. Rosemary Nyirumbe in Sewing in Uganda delights the reader with rich details and tender observations that reveal a complex woman of God who can be fierce yet gentle, tenacious and bold, unrelenting but loving. Scaperlanda's masterful storytelling invites us on a journey of discovery into the heart of Sr. Rosemary's mission to empower women devastated by violence and oppression in Uganda.

Maria Morera Johnson, author of Super Girls and Halos: My Companions on the Quest for Truth, Justice and Heroic Virtue and My Badass Book of Saints: Courageous Women Who Showed Me How to Live

María Ruiz Scaperlanda is an award-winning journalist, author, and blogger whose work has been broadly published. In 2016, María received the St. Francis de Sales Award-the highest honor given by the Catholic Press Association to an individual, for her "outstanding contributions to Catholic journalism." María is a member of the American Society of Journalists and Authors (ASJA)-and has traveled on international assignments to the Middle East, Latin America and the Caribbean, Europe, and now Africa. María and her husband of 37 years, Michael, reside in Norman, Oklahoma. They have four adult children, a Siberian Husky named Diego, and, so far, ten grandchildren. María blogs at: DaybyDayWithMaria.blogspot.com/.