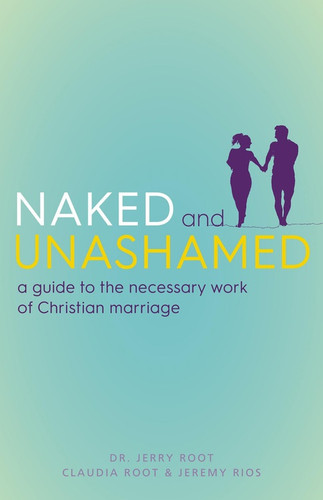 Naked and Unashamed: A Guide to the Necessary Work of Christian Marriage

Despite the abundance of magazines and self-help books available, people continue to struggle with marriage. Wedding planners, consultants, Pinterest pages, and bloggers have shaped young hearts to dream and plan for the biggest day of their lives. The day is everything, and they will plan each element with precision, from flowers to cake decorations to party favors. Couples will spend an enormous amount of time and money preparing for the wedding, but they will spend little to no time in preparation for the marriage itself.

It takes work to make a marriage successful. Divorce rates are clear evidence of this, but so also are the many married people who are in dire need of counseling and care, who persist in loneliness and difficulty, feeling ill-equipped to navigate the unforeseen difficulties of marriage.

​This book exists to coach couples through strategies which will assist them to succeed.

Jerry and Claudia Root have been married for 42 years, they have four married children and thirteen grandchildren. Jerry is a Professor and Claudia an Adjunct Professor at Wheaton College. They have invested their lives in student ministry through the church and through education. Jerry has performed over 900 weddings and done premarital counseling for at least 600 couples whose weddings he did not perform. That’s 3,000 people who have benefited from the material within this book. The Roots make their home in Wheaton, Illinois. Jerry has lectured about C. S. Lewis at more than 50 college and university campuses, and in a dozen countries around the world. He is also the author of six other books.

Jeremy Rios has been married to Liesel for 14 years. A graduate of Wheaton and Regent Colleges, he pastored two churches in Vancouver where he used this material in his own premarital counseling. He currently lives with his family in St. Andrews, where he is working toward his doctorate. Jeremy has written four other books.

The One Thing Necessary The Transforming Power of Christian Love

Blessed Is Marriage A Guide to the Beatitudes for Catholic Couples