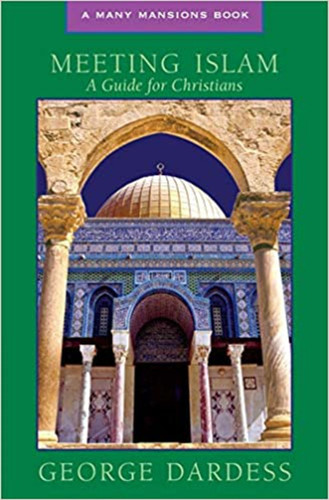 Meeting Islam: A Guide for Christians

George Dardess, author of this wise and inviting guide, believes that Jesus's injunction to "Love your neighbor as yourself" means that serious Christians should engage with Islam and come to know their Muslim neighbors.

Dardess invites readers to explore some of Islam's key facts, chief concepts, and practices, using his own failings and successes as a guide. He shares his own experiences as a deacon in the Catholic Church in Rochester, New York, seeking to build bridges with the local Muslim community, and how his own faith has been expanded and enhanced by the relationships and understandings that have resulted.

At times humorous, questioning, and warm, Meeting Islam is an engaging guide to the rewards (and the dangers) of venturing outside the boundaries of one's own faith. Dardess is sympathetic to Muslim claims to truth, and analyzes them in the light of similar, Christian claims. Each chapter ends with a theological reflection on how a particular facet of Islam may enhance (rather than detract from) our own Christian self-understanding.

Peek inside!
Written by George Dardess

When U.S. bombs fell on Iraq in 1991 George Dardess, horrified by the violence, decided to learn Arabic as a way of reaching out to the ‘enemy.’ At an Islamic center in Rochester, NY, he was surprised, and over time deeply moved, to discover not only the incomparable language of the Qur'an, but also the open, warm hospitality of the Muslims who shared with him their way of life and their faith. Mr. Dardess, a Catholic deacon, immersed himself in the study of Islam (the word Islam means, ‘handing one's self over’ to God). His willingness to experience conversion while maintaining his own Christian belief system makes for a wonderful story in which the reader will learn a great deal about Islam and see Christianity from a different angle. Meeting Islam is an important interfaith document and a model for prayerful interfaith dialogue. I loved it. I hope many, many people will read it.”

A long-time English professor and a deacon in the Catholic Church, George Dardess became interested in Islam after the first Iraq war when, as his personal form of protest against the war, he went to the Islamic Center in Rochester, New York and began learning Arabic. As his interest in Islam deepened and his acquaintance with Muslims grew, he tried to find his own personal parallels between Islamic beliefs and practices and those of Catholicism.This book takes the highly interesting approach of juxtaposing in each chapter a major Islamic concept or practice with a Christian one. So we have "Islam and 'Thy Will Be Done,'" "The Qur'an and the Word of the Lord," "Ramadan and Christmas," and "Muhammad and The Virgin Mary," to name only a few. Dardess has obviously given a lot of thought to the beliefs on both sides, and although he is clearly a devout Christian, his sensitivity to Muslim practices and theology makes him a sensitive interpreter of both faiths. Always aware that the religions differ in significant and sometimes irreconcilable ways, he does not attempt to keep a score sheet, but is content to reveal the different insights both religions have to offer.A great deal can be learned from this book about Islam on every level, whether it be the formal theology or the subtle attitudes of its practitioners, and frequently we are made surprisingly aware of how odd Christianity must look to those coming from a different faith system. At a time when so many books coming from Christian presses are taking an alarmist approach towards Islam, it is encouraging to find someone who begins with an established Muslim community within the United States and, in sane, sober language tries to describe what he finds there. The result is the discovery of some comforting similarities and some intriguing differences.

This brief book provides some introductory information about Islam and is excellent reading for Christians who are curious about one of the world's fastest-growing religions. Dardess is both deeply religious and open-minded, a pleasant and surprising combination.

During the Gulf War in 1991, the author declared himself complicities in the war because of his ignorance of Iraq and Islam. "I don't know anything about these People who are being bombed in my name and with my tax money," he writes.And so he begins his tentative steps into the Islamic Center in Rochester, N.Y. He takes his admittedly eccentric curiosity well beyond the surface and spends years digging into Arabic language, understanding the Koran, sharing in worship, prayers, friendship and feasts with Muslims.While he does all this, Dardess, a deacon in the Roman Catholic Church, is also strengthened in his own Christianity. His writing powerfully illustrates how meeting another religion helps us to be more faithful in our own.He draws out the similarities of both Abrahamic faiths, but also delves into the fundamental differences. His chapters on Jesus and on the difference between the Tauhid (God is one) and Trinity are intellectually complex and challenging but worthy of exploration."We Christians have everything to gain, as citizens and as faithful followers of Christ, by meeting our Muslim sisters and brothers in peace and openness, since these are as much the signs of balance in Christianity as they are in Islam," he writes.

Meeting Jesus on the Road to Emmaus An Invitation to Friendship, Eucharist and Christian Community