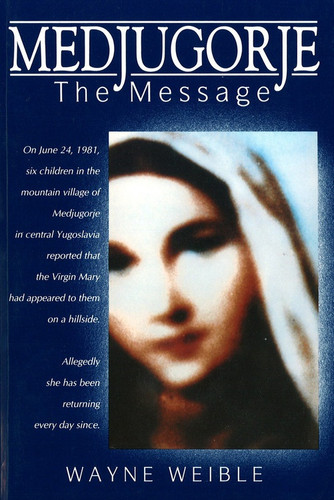 The original and bestselling story of the miracles and message of Medjugorje, the little town in the hills of the former Yugoslavia that has become a global phenomenon. Journalist Wayne Weible tells how his life was forever changed by what he experienced there.

With refreshing candor and self-deprecating humor, Wayne Weible (1937-2018) takes readers with him on the adventure to Medjugorje that radically and permanently changed his life.  You will discover the apparitions of the Blessed Mother along with him, as he chronicles the ways that the Virgin Mary continues to speak to the world today from Medjugorje. This book continues as the bestseller on Medjugorje in the English language, with over 385,000 copies sold.

“Since 1981, the message of conversion and reconciliation with God has been uniquely reaffirmed by the Blessed Virgin Mary in the unlikely little village of Medjugorje. She has been appearing there daily to six young people who live in the valley that lies in the shadow of the cross on Mount Krizevac. According to the youths chosen for this special mission of renewal, the mother of Jesus is bringing an urgent plea from her Son to all mankind to turn away from a world terminally ill with the disease of sin and reconcile with Him.” —Wayne Weible

Wayne Weible (1937-2018) was a journalist whose life was changed by what he experienced in the little town of Medjugorje in the hills of the former Yugoslavia. He wrote the testimony of what he experienced there in Medjugorje: The Message, a book that quickly became a bestseller. Over the next decades Wayne continued to spread the message of Medjugorje, writing ten more books, conducting pilgrimages, founding charities, and changing thousands of people's lives. Wayne died in 2018 at age 80.