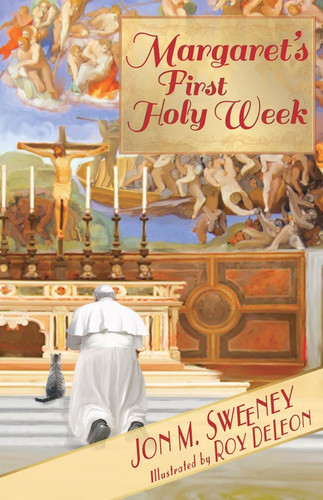 The story of Margaret and her friend the Pope continues with Book 3 in The Pope’s Cat series.

This latest adventure has Margaret experiencing the prayers, penitence, liturgy, and excitement of Holy Week in the Vatican and Rome—from the joy of Palm Sunday in St. Peter's Square, to foot-washing in a Roman prison, the solemnity of Good Friday, and the expectation of Easter.

She learns about Jesus and the meaning of his Passion, visits important new places such as The Sistine Chapel, where she seems to pray beside the Pope, and the Roman Colosseum, where she learns that many early Christians were martyrs for their faith. Margaret's friends, the Swiss Guards, are watching over her, and she manages to eat (she still loves to eat!) some interesting foods, even though it's Holy Week. Oh yes, and she sleeps a lot.

Peek inside!
Written by Roy DeLeon and Jon M. Sweeney

Jon M. Sweeney’s popular history, The Pope Who Quit: A True Medieval Tale of Mystery, Death, and Salvation, has been optioned by HBO. In addition to The Pope’s Cat series for children, he’s the author of other books including The Complete Francis of Assisi, and When Saint Francis Saved the Church, winner of a 2015 award in history from the Catholic Press Association.

Roy DeLeon is an Oblate of St. Benedict, spiritual director, yoga instructor, graphic designer, a professional visual artist, and the author of Praying with the Body.

From Palms To Passion Holy Week Devotions for Holy Week

A Week of Questions - Holy Week Bulletin Insert Pack of 50

Growing Up Catholic - Children's Liturgy of the Word What, Why, and How?