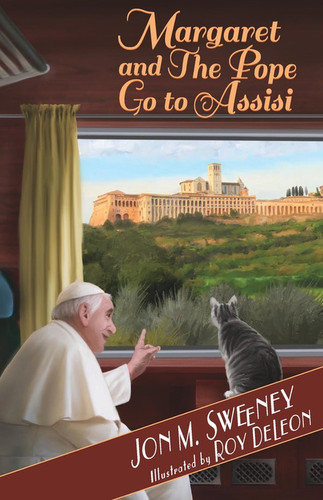 In this fourth installment of "The Pope's Cat" series, Margaret and the Pope travel for the first time together away from the Vatican and out of Rome. They go by train to the Umbrian hill town of Assisi, a place of pilgrimage for Christians all over the world who want to remember the life of St. Francis of Assisi. Together they visit the great Basilica named for St. Francis, greet Franciscan friars at the monastery, attend a World Day of Prayer for Peace, meet religious leaders (each, it seems, with a very different hat!) from around the world, and see evidence of the spirit of St. Francis all over town.

Most of all, the Pope shows his love and care for his vulnerable creature friend, as at the beginning of the book when someone from the Curia has frightened Margaret and she's hiding in a closet in the Pope's apartment. “Don’t worry, il mio amore.” (Il mio amore means “My love.”) “People can be so fussy, can’t they?” the Pope says, picking her up in his arms.

Peek inside!
Written by Roy DeLeon and Jon M. Sweeney

Jon M. Sweeney’s popular history, The Pope Who Quit: A True Medieval Tale of Mystery, Death, and Salvation, has been optioned by HBO. In addition to The Pope’s Cat series for children, he’s the author of other books including The Complete Francis of Assisi, and When Saint Francis Saved the Church, winner of a 2015 award in history from the Catholic Press Association.

Roy DeLeon is an Oblate of St. Benedict, spiritual director, yoga instructor, graphic designer, a professional visual artist, and the author of Praying with the Body.

Pope Francis The Story of Our Pope

Giving Thanks and Letting Go Reflections on the Gift of Motherhood

Let's Talk about Truth A Guide for Preachers, Teachers, and Other Catholic Leaders in a World of Doubt and Discord