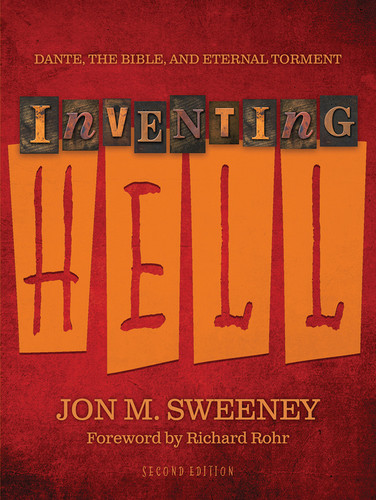 This story of how Hell got “invented” is engaging, erudite, and illuminating. It could be the most important theology book you ever read. It is also hilarious.

Jon Sweeney, convert to Catholicism and married to a rabbi, author of two dozen of his own religious books and editor of hundreds of others, delves into the question of Hell with intellectual curiosity, sincere faith, and good humor. He pretty much proves that it was Dante who gave us the Hell we have, and then he admonishes us to think again about the hell that exists around us every day.

Do you think Hell has nine levels, each one worse than the previous? Do you think that Hell is so hot it can burn your skin right off your body? Do you think that God’s punishment will fit the sins we commit? If so, you think that because of Dante, not the Bible. Maybe the Hell you do (or don’t) believe in is the one the Renaissance literary master Dante Alighieri described in the Inferno section of his epic poem The Divine Comedy. This is the Hell of eternal damnation that most of us were raised to fear, the place where, we are told by Dante, “Abandon all hope, you who enter here.” But it turns out that Dante’s vision of Hell is not based very much on the Hebrew or the Christian Scriptures but on an amalgam of sources from Greek and Roman philosophy to Medieval morality plays to Islam’s Qu’ran—all stitched together by an accomplished artist to scare the bejesus out of all of us.

Allow this book to help you reflect on what you believe about evil and what happens to bad people and just how merciful your God might be.

“To be frank, I think that perhaps no single belief has done more to undercut the spiritual journey of more Western people than the belief that God could be an eternal torturer of people who do not like him or disobey him. And this after Jesus exemplified and taught us to love our enemies and forgive offenses 70 x 7 times! The very idea of Hell (with a capital ‘H’), as Jon Sweeney explains in this magnificent book, constructs a very toxic and fear-based universe, starting at its very center and ground. Hatred, exclusion, and mistreatment of enemies is legitimated all the way down the chain of command.” —from the Foreword by Richard Rohr

Every minister, priest, rabbi, and sheikh needs to read this book, and so do we all.

His scholarship is impeccable and his sense of humor ubiquitous. Dante himself would have loved this one!

Phyllis Tickle, author, The Age of the Spirit

JON M. SWEENEY is an independent scholar, culture critic, editor, and publisher. He is the author of more than twenty-five books, including The Pope Who Quit: A True Medieval Tale of Mystery, Death, and Salvation and Francis of Assisi in His Own Words: The Essential Writings. He writes regularly for America and The Tablet. He is married and the father of four.

Using the Bible in Spiritual Direction