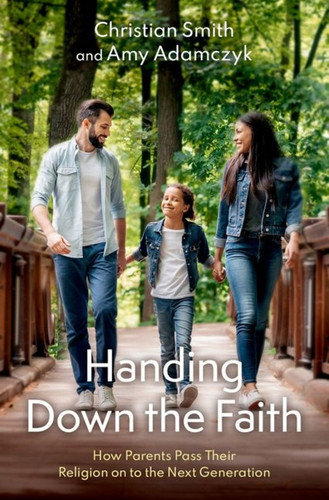 Handing Down the Faith: How Parents Pass Their Religion on to the Next Generation

SKU:
UPC:
Availability:
Release date: April 22, 2021
hardcover:
true
title:
Handing Down the Faith
subtitle:
How Parents Pass Their Religion on to the Next Generation
pricing:
$25.95

The most important influence shaping the religious and spiritual lives of children, youth, and teenagers is their parents. A myriad of studies show that the parents of American youth play the leading role in shaping the character of their religious and spiritual lives, even well after they leave home and often for the rest of their lives. We know a lot about the importance of parents in faith transmission. However we know much less about the actual beliefs, feelings, and activities of the parents themselves, what Christian Smith and Amy Adamczyk call the "intergenerational transmission of religious faith and practice." To address that gap, this book reports the findings of a new national study of religious parents in the United States. The findings and conclusions in Handing Down the Faith are based on 215 in-depth, personal interviews with religious parents from many traditions and different parts of the country, and sophisticated analyses of two nationally representative surveys of American parents about their religious parenting.

Handing Down the Faith explores the background beliefs informing how and why religious parents seek to pass on religion to their children; examines how parenting styles interact with parent religiousness to shape effective religious transmission; shows how parents have been influenced by their experiences as children influenced by their own parents; reveals how religious parents view their congregations and what they most seek out in a local church, synagogue, temple, or mosque; explores the experiences and outlooks of immigrant parents including Latino Catholics, East Asian Buddhists, South Asian Muslims, and Indian Hindus. Smith and Adamczyk step back to consider how American religion has transformed over the last 100 years and to explain why parents today shoulder such a huge responsibility in transmitting religious faith and practice to their children. The book is rich in empirical evidence and unique in many of the topics it explores and explains, providing a variety of sometimes counterintuitive findings that will interest scholars of religion, social scientists interested in the family, parenting, and socialization; clergy and religious educators and leaders; and religious parents themselves.

"This book is about how American religious parents approach the handing on of their religious practices and beliefs to their children. We know a lot about the importance of parents in faith transmission and factors that influence its effectiveness. But we know much less about the actual beliefs, feelings, and activities of the parents themselves when it comes to the intergenerational transmission of religious faith and practice"

Christian Smith is the Wm. R. Kenan, Jr. Professor of Sociology at the University of Notre Dame. He holds a PhD and MA in Sociology from Harvard University. Smith is the author of more than 20 books, many about the religious and spiritual lives of American teenagers and emerging adults.

Amy Adamczyk is Professor of Sociology at John Jay College of Criminal Justice and the Programs of Doctoral Study in Sociology and Criminal Justice at The Graduate Center, City University of New York (CUNY). She has published over 40 peer-reviewed journal articles. Her first book, Cross-national Public Opinion about Homosexuality, received the 2018 Outstanding Book Award from the International Section of the Academy of Criminal Justice Sciences.

How to Lead Faith Sharing

Please Pass the Faith The Art of Spiritual Grandparenting

How to Invite and Welcome in God's Name Parish Leader Kit

Meeting God in Motherhood Opening Our Hearts to Moments of Grace