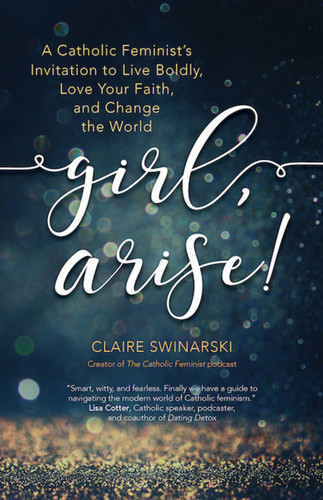 Girl, Arise!: A Catholic Feminist's Invitation to Live Boldly, Love Your Faith, and Change the World

subtitle:
A Catholic Feminist's Invitation to Live Boldly, Love Your Faith, and Change the World

Is it possible to be both a Catholic and a feminist? Claire Swinarski, writer and creator of The Catholic Feminist podcast, believes it is: “I’m a feminist for the same reason I’m bold and honest and sometimes ragey: because Jesus was all of those things.”

In Girl, Arise!, Swinarski reconciles the two identities by demonstrating the strength and abilities women have to share with the Body of Christ, the importance of women throughout the history of the faith, and how the love you experience through Christ and the Church can change you and the world around you.

In Girl, Arise!: A Catholic Feminist’s Invitation to Live Boldly, Love Your Faith, and Change the World Swinarski points out that while both “feminism” and “Catholicism” can mean different things to different people, both feminists and Catholics desire to make the world a better, fairer place. And she shows that by treating women with dignity equal to that of men—by calling them his friends and teaching them—Jesus acted as a feminist as well.

With humor and sass, Swinarski addresses her frustration with the traditional concerns churches ascribe to women, as shown by the many talks directed at women focused on marriage and modesty rather than social justice. But she pinpoints the areas where modern feminism goes too far, arguing against abortion and exploring what it means to serve others rather than focus on our own needs first.

Swinarski also tells the stories of holy women—including Vashti in the book of Esther, Sts. Thérèse of Lisieux and Joan of Arc, Mary Magdalene, and the Blessed Virgin Mary—to show how their faith influenced their actions, even when those actions went against traditional norms and roles of women.

You will be empowered to embrace your God-given abilities as you follow the women who have gone before you in faith who—by announcing Christ to his disciples, believing in God’s promises, and being faithful in hardship—changed the world.

Peek inside!
Written by Claire Swinarski

Smart, witty, and fearless. Finally we have a guide to navigating the modern world of Catholic feminism.

Whether you consider yourself a Pope Francis Catholic or a JPII Catholic, a pro-life Catholic or a social justice Catholic, or more of a Martha or a Mary, Claire Swinarski has a simple but compelling message in Girl, Arise!: You can (and should!) be a feminist, too.

Ashley McKinless
Associate editor at America and cohost of Jesuitical

It is abundantly clear that Claire Swinarski’s ferocious young heart has fallen madly in love with Jesus and his messy, glorious, miraculous Church. If your feminine heart needs a jumpstart—or a shock treatment—Girl, Arise! will read as refining, often humorous, medicine.

A must-have guide for the woman searching for her place amidst Catholic teachings and real life. Claire Swinarski is the relatable, wise big sister we all need, calling forth the strength of women and a new generation of leaders in the Church.