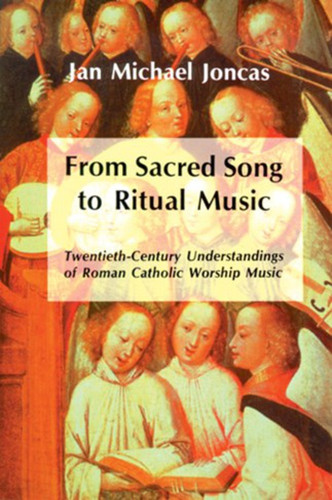 From Sacred Song to Ritual Music identifies the shifts in understanding that have led to significant changes in Roman Catholic worship music theory and practice during the twentieth century.

In this guide, nine documents are chosen to answer five questions for the future: What is Roman-Catholic worship music? What is its purpose? What are its qualities? Who makes it? and How should it be played?

From Sacred Song to Ritual Music clearly identifies for Roman Catholic church musicians, pastors, and liturgists the revolution that has occurred both in theory and in practice this century. Father Joncas shows that these nine documents are a source of inspiration and encouragement for all who generate, participate in, lead, sustain, and evaluate the worship music of the Roman rite in its journey “from sacred song to ritual music.”

. . . an invaluable, comprehensive resource for anyone serious about a thorough contemporary understanding of music in Catholic worship.

For the more advanced music minister and practitioner, this is an excellent resource to explore the various commentaries on pastoral liturgical music practice.

For the pastoral musician who is confused about the diversity of styles and celebration models present in the Catholic Church today, From Sacred Song to Ritual Music is must reading. For the pastoral musician familiar with the Church's legislation, From Sacred Song to Ritual Music provides a fresh look at 100 years of evolving viewpoints.

J. Michael Joncas is assistant professor of theology at the University of St. Thomas, St. Paul, Minnesota. He holds liturgy degrees from the University of Notre Dame and the Pontifical Liturgical Institute. He has served in parish work and campus ministry and is a composer and editor of liturgical music.

Music In Christian Worship At the Service of the Liturgy

Exploring Music as Worship and Theology Research in Liturgical Practice

Three Great Days Preparing the Liturgies of the Paschal Triduum