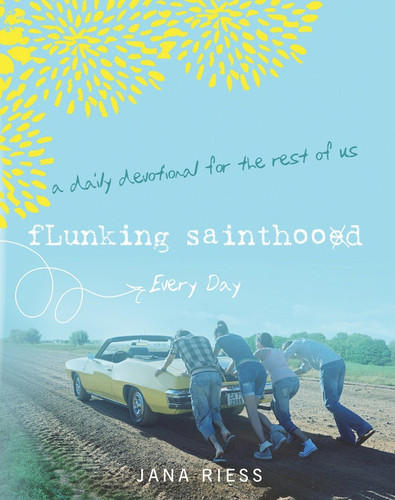 Flunking Sainthood Every Day: A Daily Devotional for the Rest of Us - Paperback Edition

In her memoir, Flunking Sainthood, Riess failed twelve different spiritual practices over the course of a year but discovered to her surprise that even the ones she failed most spectacularly taught her something important. In this beautiful daily devotional, readers who want to go deeper into the twelve spiritual practices will find 365 days of guidance, arranged according to monthly practices such as gratitude, generosity, prayer, Sabbath-keeping, and hospitality. Each day includes a short scripture verse, an inspirational reading from a contemporary or classic spiritual thinker, and a brief prayer, reflection, or follow-up action related to the day’s theme. These daily devotions help readers understand that spiritual growth is a lifelong journey without a fixed destination—and that there is great compassion for all of us who are flunking sainthood.

This book is about how to relax in our imperfections, trust God’s grace, and take authentic and practical steps toward deepening maturity in faith.”

This devotional will stimulate your brain, companion your soul, and inspire you.”

In addition to being a sagely writer, Jana is an avid quote collector. Here are 365 gems, full of mojo in insight for normal folks like us, along with a simple challenge to make each day a wonderful experience of falling forward.”

Brian D. McLaren, author of We Make the Road by Walking

Refreshingly realistic about our human imperfections and heartily confident of grace.”

Jana is a thoughtful, wise, and compassionate guide to the life of the spirit, and this book will be a daily gift to all of us who are flunking sainthood—but hope to raise our GPA.”

Greg Garrett, author of The Other Jesus

Relax, spiritual slackers. Somebody else has done all the reading. Now you have a book of poetic inspiration, Bible verses, current bestsellers and ancient thinkers, one for each day. Skip a day? No guilt. Don’t understand? You’ll catch up. What’s the point? Try doing it, anyway. Seriously? Hilariously.”

Lillian Daniel, author of When “Spiritual But Not Religious” Is Not EnoughRelaxing and Flunking Sainthood
When I got my review copy of Jana Riess's Flunking Sainthood Every Day: A Daily Devotional for the Rest of Us, I was a little stressed. I'm new to this reviewing thing, and I've got a list of books (and a few games) to review that's pretty long. It was also right before Christmas. I was trying to bake, prepare for my in-laws' arrival, and my side of the family's arrival. I was not looking forward to the juggling, and I was trying to figure out how I was going to get all of this reading done in the midst of everything else. (I realize this chaos was mostly of my own making. I'm not asking for sympathy.) The book arrived in the mail, which I picked up on the way to getting the air in my tires checked because they looked pretty low. I had my two toddlers in tow. It was snowy, but I had to go to the store, and I had to take them with me. While I was sitting in my minivan at Les Schwab, I opened the book, and thought, "I need to read this fast." I tried. I really did. I sped through the introduction with no problem. And then I got to the reading for Jan. 1, two simple paragraphs by Joyce Rupp, a writer I'd never heard of, from what I assume is her book Fresh Bread and Other Gifts of Spiritual Nourishment. Something lovely happened. I felt my tense muscles relax, and my breathing slowed. I forgot that I was reading this book for a review and felt like I was reading it for my own soul. My inner critic shut off, and I let the words do their intended work. Here are a few of them: I am not so certain that we always enter into the new year with our focus on the whiteness, the freshness, the brand-new beginnings in our heart ... Hear the God of new beginnings speak to you about the fresh start being offered.You can read my full review of Flunking Sainthood Every Day here, where I wrote it for News for Shoppers. It includes an overview of the book, why you might or might not buy it, and my conclusions. One more thought I didn't include there: This book appeals to my theology nerd side in ways I can't quite describe. Every day with a new author — either familiar or someone new to check out — gives me a little thrill.
In Flunking Sainthood Every Day: A Daily Devotional for the Rest of Us, author Jana Riess compiles spiritual writing across centuries to create a guide to 12 spiritual practices.
In case you didn’t get it from the title, Riess’s introduction makes clear that perfection is not the goal of this follow-up to her memoir, Flunking Sainthood: A Year of Breaking the Sabbath, Forgetting to Pray, and Still Loving My Neighbor:
Each day’s devotion features a question for reflection, a prayer, or a short action item to help you integrate the monthly theme into your life. These action items are not intended to be guilt-inducing; please don’t berate yourself if you only do some of them.

Since 2008, Jana Riess has been an editor in the publishing industry, primarily working in the areas of religion, history, popular culture, ethics, and biblical studies. From 1999 to 2008, she was the Religion Book Review Editor for Publishers Weekly, and continues to write freelance reviews for PW as well as other publications.

She holds degrees in religion from Wellesley College and Princeton Theological Seminary, and a Ph.D. in American religious history from Columbia University. She speaks often to media about issues pertaining to religion in America, and has been interviewed by the Associated Press, Time, Newsweek, People, the Boston Globe, USA Today, the Los Angeles Times, and Newsday, among other print publications, as well as “Voice of America,” the “Today” show, MSNBC, and NPR’s “All Things Considered,” “Tell Me More,” and “Talk of the Nation.”

She is the author or co-author of many books, including The Prayer Wheel; Flunking Sainthood; What Would Buffy Do?; Mormonism for Dummies; and The Writer’s Market Guide to Getting Published, andThe Next Mormons: The Rising Generation of Latter-day Saints. Her book The Twible: All the Chapters of the Bible in 140 Characters or Less . . . . Now with 68% More Humor! won first place in the non-fiction category in the Writer’s Digest Annual Self-Published Book Awards.

She is a senior columnist for Religion News Service.

Flunking Sainthood A Year of Breaking the Sabbath, Forgetting to Pray, and Still Loving My Neighbor

Heart to Heart with Mary A Daily Devotional

Prayers for Each and Every Day

Praying in Black and White A Hands-On Practice for Men

Praying with Mary Pack of 5