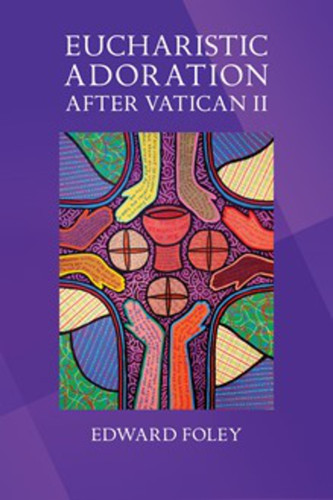 There were radical changes in the Order of Mass promulgated by Pope Paul VI in 1969. Beyond the use of the vernacular, these included a more dialogic format of the Mass, the transformation of the offertory rite to a preparation of gifts, a complete revision of the lectionary, new eucharistic prayers, and communion under both forms. In Eucharistic Adoration after Vatican II, Edward Foley examines the relationship between Vatican II, liturgical prayer, and contemporary eucharistic adoration and devotions.

"This is a much-needed study that provides readers with an accessible history and theology of adoration rooted in the spirit of the post-conciliar liturgical reforms. Edward Foley’s book is especially pertinent in the Church today as the practice of adoration, benediction, and other Eucharistic devotions captivates the imaginations of younger Catholics in particular. In response, Foley has issued a clarion call for the renewal of Eucharistic devotion in a way that respects the primacy of the Church’s liturgy. Foley brings together a solid theological grounding for adoration with concrete pastoral principles to guide its practice. He also broadens our theological approach to adoration by drawing connections to ecology and Christian ethics. This book is a must read for ministers and anyone interested in the history, theology, and practice of adoration."

"The United States Catholic bishops have committed themselves to a multi-year eucharistic revival, crowned by a National Eucharistic Congress 17-21 July 2024. Edward Foley’s Eucharistic Adoration after Vatican II provides a magnificent background and accompaniment to this program, indeed for any process intended to deepen eucharistic spirituality for the future. Marked by impressive tracing of the complex historical trajectories of eucharistic practice and devotions; a welcome account of the theological principles emerging from this history in the context of the reformed post-Vatican II Order of Mass; a sketch of an 'accessibly lived' eucharistic spirituality; and an outline of key principles and guidelines for renewed eucharistic liturgy and devotions, this short volume is the best guide I can think of for this initiative. I pray that everyone involved—laity, bishops, priests, deacons, catechists, members of religious communities, seminarians and novices—would make Foley’s accessible monograph required reading. It has my highest recommendation as a stunning example of fine scholarship and pastoral zeal brought into fruitful dialogue."

Edward Foley, Capuchin, is Duns Scotus Professor of Spirituality Emeritus and retired professor of liturgy and music at Catholic Theological Union. Foley has authored or edited thirty books, including A Handbook for Catholic Preaching (Liturgical Press), and his works have been translated into nine languages. A celebrated preacher and presenter, he received a major grant from the John Templeton Foundation for Preaching and the Sciences. A recipient of lifetime achievement awards from the Federation of Diocesan Liturgical Commissions, the North American Academy of Liturgy, and the National Association of Pastoral Musicians, he has lectured in over seventy dioceses throughout the English-speaking world.

Eating Together, Becoming One Taking Up Pope Francis's Call to Theologians

The Meal That Reconnects Eucharistic Eating and the Global Food Crisis

Entering the Next Stage with Grace A Spiritual Approach to Retiring

The 7 Joys and 7 Sorrows of Mary Reflections, Actions, and Prayers

Reclaiming Vatican II Study Guide for Individual and Group Use What It (Really) Said, What It Means, and How It Calls Us to Renew the Church

The Cultural World of Jesus - Cycle A Sunday By Sunday