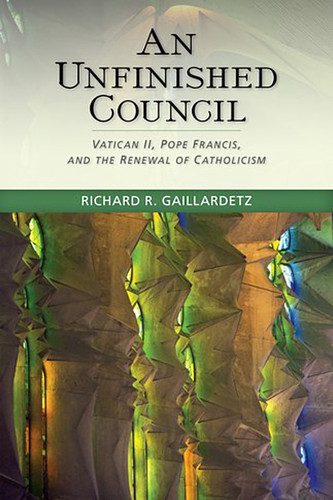 An Unfinished Council: Vatican II, Pope Francis, and the Renewal of Catholicism

The Second Vatican Council has become an indispensable reference point for understanding Roman Catholicism today. Yet in spite of its impact, Vatican II was in many ways an unfinished council. The council bishops were able to establish key pillars in the construction of a new vision for the church of our time, but, for various reasons, they were not able to draw those pillars together into a coherent unified structure. This volume describes both the council's building project itself and the challenges facing the church today if we are to complete the project begun fifty years ago.

"In leading the reader through the theology of Vatican II to this thematic assessment of Francis's pontificate, Gaillardetz has done a significant service to the ways in which we are able to reflect on what it might be to be Church for today."

In An Unfinished Council, Richard R. Gaillardetz extends a compelling invitation to the Roman Catholic Church to take the next steps in its faithful pilgrimage. Beginning with an exploration of the theological principles and historical realities operative before, during, and after Vatican II, Gaillardetz proceeds to highlight humility and magnanimity as essential ecclesial virtues that develop authentic self-understanding and create collaboration rather than competition. By examining Pope Francis's reception of Vatican II, Gaillardetz encourages his readers to be architects of the church's communion and mission who engage the periphery through listening and subsidiarity. An Unfinished Council is an accessible, insightful, and timely call for the church to engage today in ongoing reform through critical reception of the past and with hope for the future.

Coming from one of the eminent ecclesiologists in the Catholic Church today, this book is a substantial contribution to the literature on Vatican II and, indeed, takes it on a new trajectory. Using his image of "seven pillars," Gaillardetz succinctly captures the structure of a Vatican II church. With his perceptive analysis of the council's implicit vision of "non-competitive" ecclesial relationships in a church that is "magnanimous" and "humble," Gaillardetz has given us a compelling account of the work that still needs to be done, if the vision of Vatican II is to be realized. For anyone wanting keen insight into the reform agenda of the council, and its implications for today, An Unfinished Council provides an inspiring guide.

"The unity and coherence of this collection of essays offers anyone interested in the theology of Vatican II a concise yet integrated map to the possibilities for pastoral renewal emerging from the council."

"The advent of Pope Francis has been the catalyst for a new phase in the reception of Vatican II. What remains constant, however, is the church's need for reliable guides to the council and its documents, guides that also offer insight into the challenges of faithfully appropriating Vatican II in the present. Rick Gaillardetz's An Unfinished Council is such a guide, one that highlights the pastoral wisdom inherent in rich theological scholarship."

An Unfinished Council is an important synthesis of the meaning of Vatican II for the contemporary church, especially for the broad ideological spectrum of Catholic political engagement. It demonstrates how to resist the polarizing ideological divides facing Catholicism in America today.

"This compelling book examines the Second Vatican Council as an event whose full potential has not been realized. The several powerful moments in the book provide clarity and honesty that shed light on the tasks that lie ahead. Anyone concerned about the flourishing of the Church and the legacy of Vatican II will want to read this book."

"An Unfinished Council goes beyond another synthetic account of the documents of the Second Vatican Council by offering a program for renewal for the contemporary church."

The Second Vatican Council awakened Catholic consciousness to the time-conditioned nature of the church as a human community led through history toward its final fulfillment by the dynamic of God's Spirit. As such, it will always be an unfinished building project. Building on this metaphor, Richard R. Gaillardetz invites us to consider the unfinished business of receiving the council's central insights, developing a synthetic reading of its teaching apt to inform the pastoral life and missional witness of Catholics in today's world. He argues convincingly that Pope Francis presents Catholics with a fuller integration of Vatican II's enduring significance for our time, especially in his holistic vision of the church as a community of missionary disciples, confidently assuming responsibility for humble self-examination, ongoing renewal and reform, dialogical engagement within the church and with others, proclaiming the mercy and justice of God. Superbly written, a balanced, creative, and insightful reading of the challenges and opportunities facing contemporary Catholicism.

Gaillardetz is a master builder at the site of a new church under construction. Here he probes and assesses with precision the lingering remnants of obsolete pre-Vatican II church structures and practices. And with inspiring resolve and creativity he contributes to a synthetic interpretation of Vatican II's ecclesiological achievement. His blueprint accentuates the power of the Spirit in confronting the misuse of hierarchic power, while creating a new noncompetitive ordering of relationships in the church, motivated by magnanimity and humility.

"An insightful book about the situation of the Catholic Church before, during, and fifty years after Vatican II. Gaillardetz advocates for a magnanimous Catholic identity enriched by contributions from culturally engaged voices across a broad ideological spectrum."

An Unfinished Council is a hopeful book by one of the church's foremost interpreters of Vatican II. Avoiding simplistic sound-bites and worn-out clichés, Gaillardetz offers a fresh account of the council, ready for the new life breathed into the church by Pope Francis. This is a mature and magnanimous vision that, like Francis, reminds us that we all have a role to play in the ongoing reform and renewal of the church. Everyone—from the beginning undergraduate to the seasoned pastor—can learn something from Gaillardetz.

Edward P. Hahnenberg, Author of Theology for Ministry: An Introduction for Lay Ministers

Richard R. Gaillardetz holds the Joseph Chair of Catholic Systematic Theology at Boston College. He has published numerous articles and has authored or edited eleven books, including Keys to the Council: Unlocking the Teaching of Vatican II (co-authored with Catherine Clifford), published by Liturgical Press, and he is a contributor to Give Us This Day. Dr. Gaillardetz has been a delegate on the US Catholic-Methodist Ecumenical Dialogue and served as president of the Catholic Theological Society of America between 2013 and 2014.