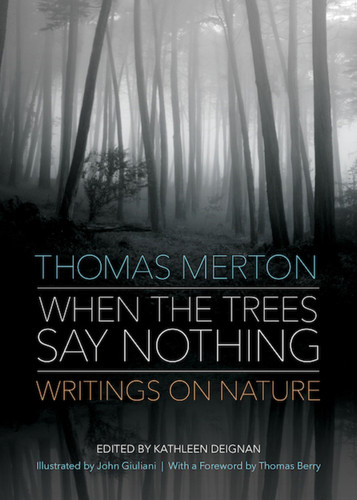 When the Trees Say Nothing: Writings on Nature

First published in 2003 and now available in paperback to celebrate the one hundredth anniversary of Thomas Merton’s birth, When the Trees Say Nothing has sold more than 60,000 copies and continually inspires readers with its unique collection of Merton’s luminous writings on nature, arranged for reflection and meditation.

Thomas Merton was a Trappist monk, author, poet, social commentator, and perhaps the most influential and widely published spiritual writer of the twentieth century. In When the Trees Say Nothing, editor Kathleen Deignan sheds new light on Merton by focusing on a neglected theme of his writing: the natural world as a manifestation of the divine.

Drawing from Merton’s voluminous writing on nature, Deignan has thematically assembled a collection of lucid, poetic reflections. Chapters on the four elements, the seasons, the Earth and its creatures, and the sun, moon, and stars provide brief passages from his diverse works that reveal the presence of God in creation.

Peek inside!
Written by Thomas Merton
Edited by Kathleen Deignan

“A vivid image in my memory: Thomas Merton standing in a redwoods clearing. ‘Here is where everything connects,’ he says softly. If you long to find this connecting point, read on. Merton would be thrilled with this book.”

“This splendid volume by Kathleen Deignan evokes the sense of the sacred. Merton’s carefully chosen texts on nature are wedded with John Giuliani’s drawings, resulting in a handsome book for all seasons.”

“A lovely book! Kathleen Deignan’s selection and arrangement of passages from Merton’s writings on nature—enhanced by John Giuliani’s evocative drawings—not only provide wonderful insights into the monks sacramental vision of the world, but also inspire a deepened attentiveness to creation on our own part as well.”

When Jesus Was a Little Boy

When the Rain Speaks Celebrating God's Presence in Nature

Let Nothing Disturb You

Teaching Kids to Care for God’s Creation Reflections, Activities and Prayers for Catechists and Families