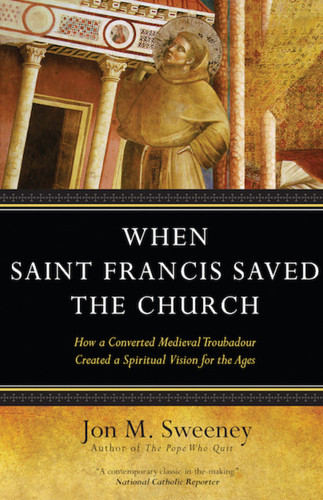 When Saint Francis Saved the Church: How a Converted Medieval Troubadour Created a Spiritual Vision for the Ages

subtitle:
How a Converted Medieval Troubadour Created a Spiritual Vision for the Ages
paperback:
true
min:
$12.76
title:
When Saint Francis Saved the Church

Now in paperback, When Saint Francis Saved the Church offers a surprising new look at the world’s most popular saint, showing how this beloved, but often-mythologized character created a spiritual vision for the ages and may very well have rescued the Christian faith.

In When Saint Francis Saved the Church (paperback), popular historian Jon Sweeney presents an intriguing portrait of Francis beyond the readily familiar stories and images. In the tradition of Thomas Cahill’s How the Irish Saved Civilization, Sweeney reveals how the saint became a hinge in the history of the Christian faith and shows how in just fourteen years—from 1205 to 1219—the unconventional and stumbling wisdom of a converted troubadour changed the Church. Sweeney outlines Francis’s revolutionary approach to friendship, “the other” (people at the margins), poverty, spirituality, care (for people, creatures, and the natural world), and death.

This vibrant book presents the unsullied life and message of Francis in its essential details, offering a sweeping, informative, remarkable look at how Francis and his movement quite literally saved the Christian faith—and continues to offer a spiritual vision with contemporary relevance.

Jon Sweeney’s eleven other books have combined sales of more than 150,000 copies. He has appeared on Fox News, CBS’s News in Chicago, CBS’s Saturday Morning, WGN-TV, WTTW in Chicago’s Chicago Tonight, and PBS television, as well as a wide variety of radio programs. Sweeney is an independent scholar, culture critic, and writer of popular history, best known as the author of The Pope Who Quit (a History Book Club selection, an audio book from Franciscan Media, and was optioned by HBO, Inc).

"After trying to follow Christ as a Franciscan for almost fifty years, I can honestly say this is an exciting, intelligent, and faithful understanding of Francis of Assisi—for our time and for all time!  Read, and find hope!"

Richard Rohr, O.F.M.
Found of the Center for Action and Contemplation

"Jon Sweeney is good at many things, but he is a master at retrieving the treasure of the Christian past and restoring it to currency for the Christian present. In this book, he transcends even those categories. Francis of Assisi, a saint for every age, springs to life under Sweeney’s attentive care."

Barbara Brown Taylor
Author of An Altar in the World

"Jon Sweeney applies popular history to a man who changed history, St. Francis of Assisi. Deeply familiar with the Franciscan sources and writing in a very accessible style, Sweeney points to Pope Francis’s inspiration. I like this book!"

"This well-informed meditation on the life of St. Francis is a delight to read. Jon Sweeney’s careful and timely retelling of Francis’s story deepens our understanding of why a twenty-first-century pope took the saint’s name—and gives us hope for the future of the Church."

Paul Moses
Author of The Saint and the Sultan

"Once again with his reader-friendly style, practical advice, and sense that history is really present in its impact on our daily lives, Jon Sweeney brings St. Francis into the twenty-first century as a friend and model we can delight in and trust. In six simple ways, Sweeney’s Francis shows us how to transform our lives and give them joy and meaning. This Francis is a Francis that readers may feel they are meeting anew and finding even more relevant in their lives."

Murray Bodo, O.F.M.
Author of The Way of St. Francis

The Church of Mercy A Vision for the Church

The Loneliness and Longing of Saint Francis

When the Rain Speaks Celebrating God's Presence in Nature

When We Visit Jesus In Prison Guide for Catholic Ministry

When Silence Falls The Stations of the Cross

What Every Catholic Needs to Know about Marriage, Divorce, Nullity and Remarriage

Whenever there is Silence A poetic reflection on the Cross

When a Child You Love Is Grieving

What Was There for Me Once A Memoir