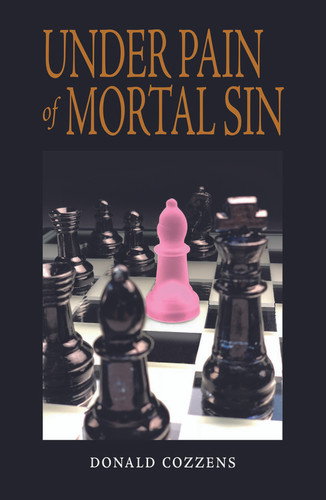 Fergus Mann, an assassin hand-picked by men he deems to be true believers and protectors of the supreme center of his beloved church, plunges into action as an agent of divine retribution.

Placing the cincture over the hanger’s hook of her garment bag, Reverend Laura Spivak noted with curiosity the crunch of car tires on the gravel drive in front of the lodge where she had just celebrated Mass. Maybe a park ranger coming to secure the lodge for the night. The door of the lodge opened slowly, and she turned to see instead, standing full in the doorway, a man of average height in a nylon workout suit. He stood still for a second, as if posing for a picture, his shadowed eyes dark and unblinking.

“May I help you?” she asked, her voice thin and tight.

So begins the story of Bishop Bryn Martin’s new engagement with powerful forces determined to preserve and protect their particular orthodoxy. The bishop’s first months as the ordinary of a Roman Catholic diocese will bring him face-to-face with the darkest impulses of the human heart, to a place where sins—and consequences—are too often mortal.

Donald Cozzens is one of the most respected moderate voices on Catholic issues. –The New York Times

My priestly colleague Donald Cozzens weaves a delicious tale of a cabal of right-wing Catholics determined to halt the ordination of women by any means, including murder, only to be thwarted by the savvy new Bishop of Cleveland, Bryn Martin. Upon Pain of Mortal Sin is a mystery novel that is also an ecclesial tour-de-force. It would be a sin to miss it.

In Cozzens' latest work, Master of Ceremonies, published by In Extenso Press, he revisits themes that have dominated much of his writing…. But this time, he spins the narrative in the form of a mystery novel.

DONALD B. COZZENS is a Catholic priest of the Diocese of Cleveland who has served as writer in residence at John Carrol University, vicar for clergy, and rector of the seminary among other assignments. Cozzens has been described as “a frank and insightful voice of reason” for his many books and international lectures where he argues persuasively that transparency and candor, not secrecy and silence, are the first steps toward a more humble, healthy, and credible Church.

Arguing Religion A Bishop Speaks at Facebook and Google

Mortal Sins Sex, Crime, and the Era of Catholic Scandal

Bishops on the Border Pastoral Responses to Immigration

Unchained Our Family's Addiction Mess Is Our Message

Two Christmas Handouts Formation on Angels and the Christmas Créche

Understanding the Mass A Prayerful Guide to the Liturgy

Master of Ceremonies A Novel

Twelve Little Ways to Transform Your Heart Lessons in Holiness and Evangelization from St. Thérèse of Lisieux

Lord of the World A Novel