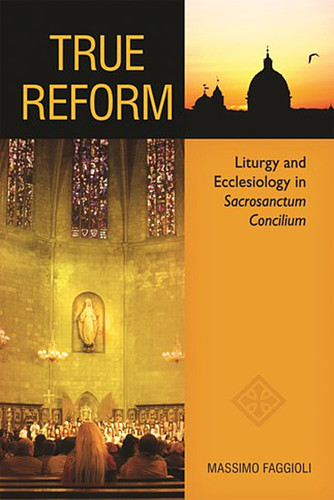 For Massimo Faggioli, the debate about the meaning of Vatican II too often misses the profound significance of that council's first and perhaps most consequential document, Sacrosanctum Concilium. The result is a misunderstanding of both the council as a whole and the liturgical reform that followed from it.

In True Reform, Faggioli takes Sacrosanctum Concilium as a hermeneutical key to the council. He offers a thorough reflection on the relationship between the liturgical constitution and the whole achievement of Vatican II and argues that the interconnections between the two must emerge if we want to understand the impact of the council on global Catholicism.

This is an important and valuable book because Faggioli clarifies and supports with data what many have already known (and perhaps feared) about the critical link between liturgy and ecclesiology and the seminal importance of SC for the theology of Vatican II. This book should be read not only by liturgists, but also by ecclesiologists and all those interested in the legacy of Vatican II. It is an important resource for students of Vatican II, seminarians, and undergraduates and graduates of theology. The connections made are vital; the concerns raised are important, and the insights shared provide a fresh understanding of the legacy of Vatican II.

True Reform is a thoroughly documented analysis of Sacrosanctum Concilium and its reception by the Second Vatican Council itself. The document's connection with the ecclesiology of the council emerges fully. In this way, the book provides a deep understanding of the council in its liturgical dimension and its unavoidable call to reform the church in order to be more faithful to the Gospel of Jesus Christ.

This masterful work is a must read for any who seriously wish to move beyond the battle for the meaning of the Second Vatican Council and enter into respectful dialogue, as also for any who wish to gain a fresh understanding of the Constitution's deeper meaning for the future renewal of the church.

I was particularly struck by the richness and multifaceted dynamism of the liturgical reform that Faggioli describes. . . . This work is both thought-provoking and timely.

Faggioli has produced an equally remarkable book, this time dealing with the key role of the Constitution on the Liturgy, Sacrosanctum Concilium, in the story of Vatican II. . . . With Francis as the new Bishop of Rome, there has been a fresh surge of hope among Roman Catholics demoralized by the direction in which things have been moving in recent years. For such people Faggioli's book will provide further grounds for hope.

Faggioli argues masterfully for the ecclesiological dynamic of Sacrosanctum Concilium.

Massimo Faggioli has emerged as one of the most insightful and energetic young scholars in Catholic theology today. In this bold new book, Faggioli makes a compelling argument that the significance of Vatican II's Constitution on the Sacred Liturgy was not limited to liturgical reform; the document established a compelling ecclesiological vision that set the agenda for later conciliar documents and the postconciliar church. Faggioli lays out for us what is really at stake in the many recent assaults on the council's liturgical reform-nothing less than an assault on the entire ecclesiology of the council. This book belongs on the short list of those truly indispensable studies of the Second Vatican Council.

This is a valuable, even groundbreaking, study for the interpretation of Vatican II. Faggioli succeeds in showing how the liturgy constitution and the subsequent liturgical reform are essential for the understanding and implementation of the council. It should be required reading for ecclesiologists and historians of the contemporary church as well as for students of the liturgy-perhaps even for members of the Roman Curia.

I cannot recommend this book strongly enough for anyone who is concerned with studying the theological implications of the liturgical reform of the past fifty years. It would probably not be very useful for undergradutes, but it certainly should be considered for graduate seminars on Vatican II. Anyone who teaches liturgy and/or sacraments should have this book on his or her shelf.

Massimo Faggioli is assistant professor of theology at the University of St. Thomas in St. Paul, Minnesota. He has written extensively on modern Church history and on Vatican II. He is the author of Vatican II: The Battle for Meaning (Paulist, 2012).

The Outsider Pope Francis and His Battle to Reform the Church

Sacra Pagina The Gospel of Matthew