The Whole Language The Power of Extravagant Tenderness 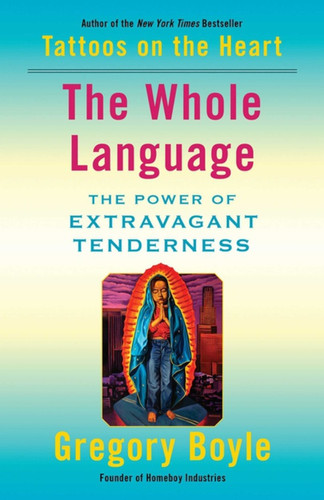 The Whole Language: The Power of Extravagant Tenderness

The founder of Homeboy Industries, the largest and most successful gang-intervention program in the world--through a series of stories that bear witness to the transformative power of tenderness--challenges ideas about God and about people.

Gregory Boyle, the beloved Jesuit priest and author of the inspirational bestsellers Tattoos on the Heart and Barking to the Choir, returns with a call to witness the transformative power of tenderness, rooted in his lifetime of experience counseling gang members in Los Angeles.

Over the past thirty years, Gregory Boyle has transformed thousands of lives through his work as the founder of Homeboy Industries, the largest and most successful gang-intervention program in the world. Boyle's new book, The Whole Language, follows the acclaimed bestsellers Tattoos on the Heart, hailed as an "astounding literary and spiritual feat" (Publishers Weekly) that is "destined to become a classic of both urban reportage and contemporary spirituality" (Los Angeles Times), and Barking to the Choir, deemed "a beautiful and important and soul-transporting book" by Elizabeth Gilbert and declared by Ann Patchett to be "a book that shows what the platitudes of faith look like when they're put into action."

In a community struggling to overcome systemic poverty and violence, The Whole Language shows how those at Homeboy Industries fight despair and remain generous, hopeful, and tender. When Saul was thirteen years old, he killed his abusive stepfather in self-defense; after spending twenty-three years in juvenile and adult jail, he enters the Homeboy Industries training and healing programs and embraces their mission. Declaring, "I've decided to grow up to be somebody I always needed as a child," Saul shows tenderness toward the young men in his former shoes, treating them all like his sons and helping them to find their way. Before coming to Homeboy Industries, a young man named Abel was shot thirty-three times, landing him in a coma for six months followed by a year and a half recuperating in the hospital. He now travels on speaking tours with Boyle and gives guided tours around the Homeboy offices. One day a new trainee joins Abel as a shadow, and Abel recognizes him as the young man who had put him in a coma. "You give good tours," the trainee tells Abel. They both have embarked on a path to wholeness.

Boyle's moving stories challenge our ideas about God and about people, providing a window into a world filled with fellowship, compassion, and fewer barriers. Bursting with encouragement, humor, and hope, The Whole Language invites us to treat others--and ourselves--with acceptance and tenderness.

This is a beautiful and important and soul-transporting book. It's written by Gregory Boyle, a Jesuit priest in Los Angeles who has worked with (and loved) gang-members for decades. This book is about how to love people. How to really love people. And how to know God when you see God. . . . This is a fantastic book. Please read it.

If you're in the market for genuine inspiration, I urge you to read Barking to the Choir by Gregory Boyle, a book that shows what the platitudes of faith look like when they're put into action.

Destined to become a classic of both urban reportage and contemporary spirituality.

An astonishing book . . . about suffering and dignity, death and resurrection, one of my favorite books in years. It is lovely and tough and tender beyond my ability to describe and left me in tears of both sorrow and laughter.

One of the bravest, most humane, heartbreaking, brilliant, and hopeful stories I've read in ages. Father Greg, the Gandhi of the Gangs, fills Tattoos with unquenchable soul force and down-to-earth love.

Jack Kornfield, author of A Path With Heart

Sometimes we are allowed to see in our own lifetimes what we were supposed to see in the life and ministry of Jesus. Read, and let your life be changed!

Incandescent, always hope-filled and often hilarious. Boyle somehow maintains an exuberant voice that celebrates the strength, compassion and humanity of people often demonized. He simply highlights charity and goodness wherever they are found. Boyle intersperses his narratives about gang members and his work with them with theological and spiritual reflections from a variety of theologians, poets and other writers. By introducing book-buying, highly educated readers to people we may never otherwise encounter, Boyle aspires to "broaden the parameters of our kinship.'

Father Boyle reminds us all that every single child and youth is a part of God's 'jurisdiction'--and when they know that we are seeing them as God does, they are capable of great things. Father Boyle is a national treasure.

A spiritual masterpiece touching the innermost sanctum of the human soul. Boyle approaches each person as a child of God and fully deserving of love and compassion. His capacity to reach the heart of the most hardened, and to see the best in everyone, inspires. I laughed, wept, and underlined on virtually every page.

Kerry Kennedy, founder of The RFK Center for Justice and Human Rights

An extraordinary reflection of a life totally committed to reshaping and redirecting the lives of countless young gang members (from L.A.'s gang culture), Greg Boyle's Tattoos on the Heart proves one man with courage is a majority.

Tattoos on the Heart is an honest, raw, and compelling collection from Father Greg Boyle's life and work with gang-involved youth. His commitment should teach us all a lesson in compromise, sharing, learning, loving, and, most important, living life to the fullest.

Gregory Boyle is an American Jesuit priest and the founder of Homeboy Industries in Los Angeles, the largest gang-intervention, rehabilitation, and re-entry program in the world. He has received the California Peace Prize and been inducted into the California Hall of Fame. In 2014, the White House named Boyle a Champion of Change. He received the University of Notre Dame's 2017 Laetare Medal, the oldest honor given to American Catholics. He is the acclaimed author of Tattoos on the Heart and Barking to the Choir. The Whole Language is his third book, and he will be donating all net proceeds to Homeboy Industries.

Lost in Translation The English Language and the Catholic Mass

Praying the Rosary With Scripture in 4 Languages: English, Spanish, Vietnamese, and Tagalog