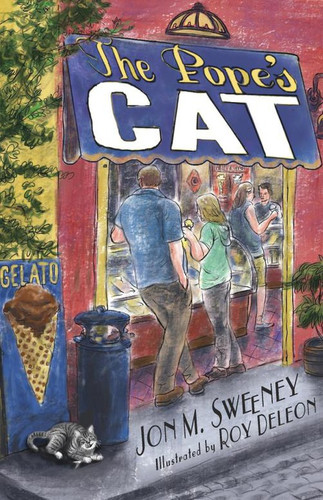 Released for the 5th anniversary of the election of Pope Francis!

This is the story of a stray born on the Via della Conciliazione in Rome, how she’s adopted by the Pope, and then “rules” the Vatican from museum to floorboard! First in a new series.

No one has a closer view of what’s happening in the world’s tiniest nation, Vatican City, than Margaret, the Pope’s new cat. But she wasn’t always Margaret, and she wasn’t always the Pope’s cat. She started out as a stray on the streets of Rome, and there are those in the Vatican who wish she’d never been allowed inside.

This fun, adorable new character will appeal to all kids! Here is a cat who does what she likes regardless of what others, even someone like the Pope, expects of her!

The Pope’s Cat is a heartwarming tale, which gives the papacy a human touch, along with a taste of life in Rome. Sweeney has done an excellent job in opening up the world of the Vatican to youngsters. I read it to my two children and they both loved it!

Young readers will surely fall in love with Margaret, the spirit-filled pet at the heart of The Pope's Cat! Accompanied by fanciful illustrations from Roy Deleon, Jon Sweeney’s first book for children invites us to peek inside the Vatican and discover a Pope who loves adorable cats just like the rest of us.

Margaret brings joy and quiet companionship into the Pope’s life in this sweet tale of friendship that left me hungry—not only for gelato and spaghetti alle vongole—but for more stories about this dear pair.

Jennifer Grant, award-winning author of Maybe God Is Like That Too

As a self-professed gelateria Catholic, fascinated by Rome, the papacy, and cats, I cannot wait to read this story to our children and the cats we have at home.

Jon M. Sweeney is an independent scholar, editor, and culture critic with a wide range of interests. He is married and the father of three. His 2012 book, The Pope Who Quit: A True Medieval Tale of Mystery, Death, and Salvation was published by Image/Random House, was a History Book Club selection, and optioned by HBO, Inc.

Jon has worked in book publishing for 25 years. For many years, he was the vice president of marketing for Jewish Lights Publishing in Vermont, as well as the co-founder and editor-in-chief of SkyLight Paths Publishing. Since 2004, he has been the editor-in-chief of Paraclete Press in Massachusetts. He is the author of many books about Francis of Assisi including The Road to Assisi: The St. Francis Prayer Book, The St. Francis Prayer Book, Francis of Assisi in His Own Words: The Essential Writings, and When Saint Francis Saved the Church. He has lectured across the U.S. on subjects related to Francis, including at The National Cathedral in Washington D.C. He writes regularly for the Jesuit weekly, America, The Tablet in the UK, and blogs on the Religion page of The Huffington Post.

Jon grew up in the evangelical Christian town of Wheaton, IL, made famous by Billy Graham, and is featured in the Wheaton volume of Arcadia Publishing's Legendary Locals series. Today he is a Catholic but prays most regularly with his wife, Michal Woll, who is the rabbi of the Ann Arbor Reconstructionist Congregation. They live in Vermont, and have written a book together titled Mixed-Up Love: Relationships, Family, and Religious Identity in the 21st Century.

I Will See You in Heaven Cat Lover's Hardcover Edition

The People Wish to See Jesus Reflections for Those Who Teach

The Rebuilt Field Guide Ten Steps for Getting Started

The Pocket Gospels and Psalms NRSV

The Psalms A Bible Study in Plain English

The Suitcase A Story About Giving