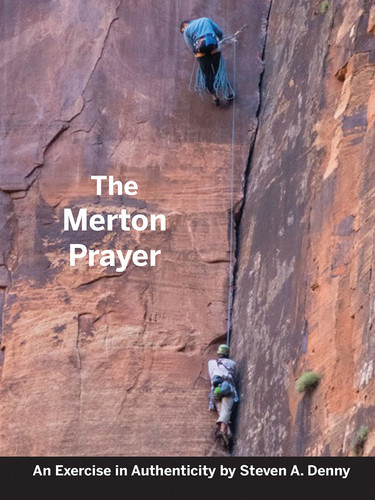 The Merton Prayer: An Exercise in Authenticity

“My Lord God, I have no idea where I am going. I do not see the road ahead of me. I cannot know for certain where it will end. Nor do I really know myself, and the fact that I think that I am following your will does not mean that I am actually doing so. But I believe that the desire to please you does in fact please you. And I hope I have that desire in all that I am doing. I hope that I will never do anything apart from that desire. And I know that if I do this you will lead me by the right road, though I may know nothing about it. Therefore will I trust you always, though I may seem to be lost and in the shadow of death. I will not fear, for you are ever with me, and you will never leave me to face my perils alone.”

“The Merton Prayer” is not a magical incantation. It is a heartfelt, gut-wrenchingly honest reaching-out to God and looking inward to view our true and false selves. Thomas Merton’s well-known prayer might change your life as it has the author’s. In this unique “exercise in authenticity” are fourteen reflections on the prayer by ordained clergyman, Middle-Eastern language scholar, and attorney Steven A. Denny that each unpack a single phrase or line of the 158 total words in “The Merton Prayer” using:

Visual Metaphors: Four-color photographs that allow you to reflect on your initial emotional reactions and responses evoked by a few words of “The Merton Prayer.”

Scriptural Bases: Six scriptural passages that jump out with confirmation of what Merton is praying.

Exegesis: The real meaning of Merton’s words that you are encouraged to “ask and keep on asking about, making your asking a matter of daily habitual behavior.”

Personal Stories: How Merton’s prayer has spoken to the author and others regarding their disappointments, joys, unexpected career changes, brushes with illness or death, and other major life events.

The Merton Prayer, to me, is a prayer for the ages, not limited to time or place. Once the words of this prayer become real in the lives of Christ-followers and God-seekers, the trajectory of our journey must always be marked by authenticity. I believe we simply cannot bring Merton's prayer into our life regularly and remain superficial in relating to God or to one another. Superficiality bequeaths superficiality, whereas "depth cries out to depth."

No matter when "now" is, The Merton Prayer is apt and powerful. Humanity has searched for the "right road" in facing the evils of the Holocaust, slavery in America, persistent world-wide misogyny, genocidal maniacs in so many different countries, and health calamities such as the Spanish Influenza and Covid-19 pandemics.

Would Merton alter a single word of his prayer for our world and beyond today? I think not. Desiring to please God, honestly confessing our ignorance and weakness, seeking God's leading, and acknowledging God's omnipresence—these are the very things that will allow individuals, families, nations, and humanity itself to choose the "right road."

Written by Steven A. Denny

Thomas Merton's incredibly powerful prayer is used by countless people, from all walks of life, throughout the world. Steven Denny's book mines the untold, hidden depths of what is popularly referred to as "The Merton Prayer." Denny's work encourages readers with fresh insight that will stir the depths of their being and draw them, ever more fervently, into the incredible beauty and profundity of Merton's spiritual insights.

This is the quintessential modern pilgrim's prayer. Denny shows his deep understanding of, and reveals much about, the most important Catholic spiritual writer of the twentieth century.

Jon M. Sweeney, author of Thomas Merton: An Introduction to His Life, Teachings, and Practices

Steven Denny provides us with a long-overdue exploration of The Merton Prayer, using a kind of lectio divina—a slow, contemplative, sacred reading—of each phrase. Throughout, we learn of Denny's own remarkable spiritual journey, critical moments in his life, and blessings he has received from regularly turning to this remarkable prayer.

Judith Valente, author of The Art of Pausing and How to Live

Thomas Merton, a modern-day St. Augustine in his conversion to God, has left us many thought-provoking writings on spirituality, including what is referred to as "The Merton Prayer" from his book Thoughts in Solitude. Steven Denny has incorporated this prayer into his life as an "exercise in authenticity" and writes convincingly about its power with the wonderful authority of one who has experienced it.

Steven A. Denny is a scholar, an attorney, a certified mediator, and an ordained clergyman, originally from Kentucky, who now lives in Oak Park, Illinois. He and his wife Miran have five adult children. Denny runs a private law firm whose motto is "Striving for Justice in an Imperfect World." He knows Hebrew and several other Middle-Eastern languages, and his maternal grandfather was a Jewish immigrant from Russia. Denny has spent considerable time at the Our Lady of Gethsemani Trappist monastery in Kentucky and credits The Merton Prayer for getting him through very aggressive cancer several years ago. This is his first book.

Mr. Denny has the following academic degrees: MA in Semitic Languages from Lincoln Christian Seminary, MA in Ancient History from Illinois State University, PhD (Candidacy) in Northwest Semitic Philology from the University of Chicago, and JD from The University of Illinois/John Marshall Law School. He was a pastor for 10 years, Instructor of New Testament Greek for 4 years, Ombudsman at a major Chicago hospital for 6 years, and has been a plaintiff's trial attorney for 36 years. Mr. Denny was President of the Christian Legal Society Northern Illinois Chapter for 6 years and preached at the Cook County Jail for 15 years. He founded a Chicago men's book club which is now 20 years old having read 80 books. Hobbies include: an incurable Kentucky Wildcat basketball fan, Bob Dylan music, travel, reading, and the Alaskan Iditarod Dog Sled Race. He is a member of the International Thomas Merton Society.

My opposing counsel surprised me by asking if I wanted to ride back with him to my downtown Chicago law office. We had chatted amicably at a couple of other depositions but had never spoken socially outside of the courtroom or deposition room.

The reason for his unexpected request became apparent quickly enough. "Steven, I noticed in your briefcase a book by Thomas Merton. Are you by chance aware of his 'I don't know where I'm going' prayer?" Then, in a way that communicated rare and authentic vulnerability, he said, "This prayer has saved my life, over and over. It has gotten me through a divorce, drug addiction, suicidal thoughts, deaths of loved ones, and career-ending mistakes. I could not have survived without this prayer in my life."

I told him, "Yes, I know The Merton Prayer well; it has also been a huge part of my ongoing connection with God." That lawyer and I became friends and have shared many other encounters about our Christian journeys, but there has never been another conversation I have had with anyone about anything that has changed my life like this one did.

I believe that conversation, in 2014, gave birth to the ideas for this book. The Merton Prayer, which has meant so much to me, has obviously helped countless others in their walk with God. This is a book for all Christ-followers, of any and all "flavors of Christendom,"  and I have no theological bones to pick with anyone in these pages, so please proceed knowing that the only goal is to share my thoughts on this life-changing and life-enhancing prayer, known worldwide as "The Merton Prayer."

Sometime in the 1990s, when I first read this prayer, it was as if I had come home to a place where I met God and God met me. It felt like an old comfortable quilt made by my grandma, which a child could cuddle in on rainy cold days in front of a crackling fire--perhaps while drinking hot chocolate. It also felt like a magnet that drew me to God and would not let me go. No matter what my circumstances of life were at the time, this prayer gave me strength, which in turn led to real peace and filled me with confidence that God was "ever with me" and indeed would "never leave me to face my perils alone."

So how did a Protestant-Evangelical-Christian, former clergyman-turned-trial-attorney in Chicago, ever find "I don't know where I'm going," a prayer written by a famous yet seemingly unapproachable (to me) Catholic Trappist monk from Kentucky? How did it become my own immersive exercise in authenticity? It is from Merton's book Thoughts in Solitude,  and I confess that when I got to that one-page prayer in 1990, I stopped reading, and honestly, do not believe that I have ever read the remainder of that book, though I have devoured many other books written by Merton. I simply could not and cannot get past the prayer.

Since that first encounter, the words of The Merton Prayer have been with me every single day. I soon came to have it memorized and realized that I could not go through a day without meditating on it. I say it to myself on my way to work; I say it out loud in the health club steam room (if nobody else is present!); I talk about it so often in my small accountability men's group that the others often say, "Look out, here comes Merton again!" I pray the prayer at the beginning of my daily "quiet time"; phrases from it end up attached to my "breath prayers" (short prayers uttered with inhalation and exhalation) as I walk to and from courtrooms. A copy is posted by my computer in my office. The Merton Prayer quickly became an integral part of my inner being. But never, in my wildest dreams, did I ever think that it would save my life. But it did. And that is what this book is about.

Scripture, from the Gospels, a Psalm, Paul's words, or one of Solomon's proverbs, constantly spring out to me and often elucidate and confirm phrases from The Merton Prayer. My seminary Professor of Hebrew, John Ralls, told a story of a Talmudic rabbi whose students asked him, "Rabbi, how best does one study Torah?" The rabbi responded, "Turn it, turn it, turn it. It's all there." That's how I feel about Merton's prayer.