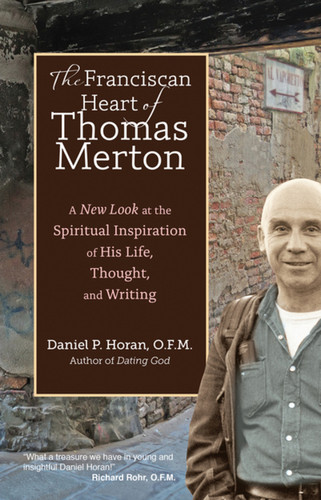 The Franciscan Heart of Thomas Merton: A New Look at the Spiritual Inspiration of His Life, Thought, and Writing

subtitle:
A New Look at the Spiritual Inspiration of His Life, Thought, and Writing
paperback:
true
min:
$13.56
title:
The Franciscan Heart of Thomas Merton

Daniel Horan, O.F.M., popular author of Dating God and other books on Franciscan themes—and expert on the spirituality of Thomas Merton—masterfully presents the untold story of how the most popular saint in Christian history inspired the most popular spiritual writer of the twentieth century, and how together they can inspire a new generation of Christians.

Millions of Christians and non-Christians look to Thomas Merton for spiritual wisdom and guidance, but to whom did Merton look? In The Franciscan Heart of Thomas Merton, Franciscan friar and author Daniel Horan shows how, both before and after he became a Trappist monk, Merton’s life was shaped by his love for St. Francis and for the Franciscan spiritual and intellectual tradition. Given recent renewed interest in St. Francis, this timely resource is both informative and practical, revealing a previously hidden side of Merton that will inspire a new generation of Christians to live richer, deeper, and more justice-minded lives of faith.

How could I not be elated? Two of my favorite human beings running side by side through one fine book: Francis and Merton! Just the chapters on Duns Scotus, 'paradise consciousness,' or peacemaking and prophecy, would make the book well worth the read! What a treasure we have in young and insightful Daniel Horan!

Horan’s book is a thorough and eloquent, yet personal and highly engaging, exploration of Merton’s multilayered, multifaceted engagement with St. Francis and the Franciscan tradition.

Two extraordinary religious figures, one medieval, one modern, both still inspiring and prophetic, even in the twenty-first century. Fr. Dan Horan’s The Franciscan Heart of Thomas Merton is a fascinating study of both Thomas Merton and St. Francis of Assisi: how they and their spiritualities are alike, how they differ, how each one had a profound impact on the times in which he lived and on posterity, and most interestingly, how deeply Merton was influenced by the life and spirituality of St. Francis. I was immersed again in two of the greatest influences on my own life and marveled at Horan’s persuasive and comprehensive argument for why they are important to all of us today.

Murray Bodo, O.F.M.
Author of Francis, the Journey and the Dream

This finely textured volume highlights Thomas Merton's intellectual and spiritual debt to the Franciscan tradition. Like the good householder of the Gospel, Daniel Horan draws forth old things and new and, in the process, beautifully reveals how the Poor Man of Assisi and the Trappist monk in Kentucky speak as one voice to our age.

This new, uncovered information, that separates fact from fiction and profundity from caricature, confirms our suspicions of Francis’s influence on Merton.

Combining scholarly insight with pastoral sensitivity, Daniel Horan, O.F.M. shows in rich and fascinating detail why Francis of Assisi remained Thomas Merton’s favorite saint and how the Franciscan intellectual and spiritual tradition continued to have a profound impact on Merton’s thought even as a Cistercian, from Christology to ecology, from peacemaking to dialogue with other religious traditions. This is an accessible and absorbing exploration of a significant influence on Merton’s life and thought, particularly welcome in this new 'Age of Francis.'"

“Daniel Horan brings a fresh and welcome perspective to the life and legacy of the twentieth century’s most celebrated monk. Schooled in the riches of the Franciscan tradition, the author shows how Merton the Trappist monk continued to be shaped by the Franciscan sources he had come to love in his young adulthood. In a voice at once deeply informed and warmly personal Horan advances a most intriguing thesis: By not becoming a Franciscan friar, Merton became even more Franciscan in his spiritual orientations and outlook and remained so throughout his life.”

We are living in a newly emerging Franciscan age as history gyres toward the magnetic spirit of the gentle, ferocious 'Poor Man.' All creation and all the impoverished are groaning to summon him to awaken us to the kinship of all beings, and begin—if we might—to set the world aright. Little wonder that Thomas Merton’s prophetic soul bore the vestiges of his original inspiration, whose mystic heart left its marks on Merton’s own. In true Franciscan voice Daniel Horan offers us a glimpse of the rich and many ways Father Francis was the first and lasting teacher of his Cistercian son.

Why Do We Have to Be So Quiet in Church? and 12 Other Questions Kids Have About God