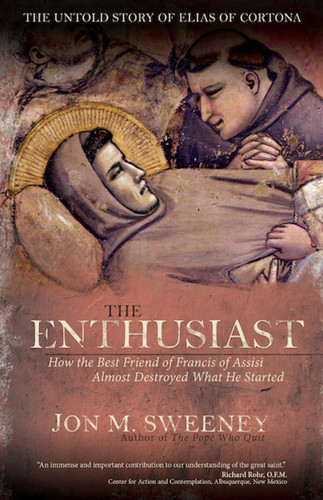 The Enthusiast: How the Best Friend of Francis of Assisi Almost Destroyed What He Started

subtitle:
How the Best Friend of Francis of Assisi Almost Destroyed What He Started
paperback:
true
min:
$15.16
title:
The Enthusiast

Popular historian and award-winning author Jon M. Sweeney relates the untold story of St. Francis’s friendship with Elias of Cortona, the man who helped him build the Franciscan movement. Sweeney uses the complexities of their relationship in a gripping narrative of how their efforts changed the world and how Elias’s enthusiasm betrayed the ideals of his friend.

Few biographies of St. Francis have examined his complicated relationship with close friend Elias of Cortona. In The Enthusiast, award-winning author and historian Jon M. Sweeney delves into this little-known partnership that defined and then almost destroyed Francis’s ideals.

Blending history and biography, Sweeney reveals how Francis and Elias rebuilt churches, aided lepers, and entertained as “God’s troubadours” to the delight of everyday people who had grown tired of a remote and tumultuous Church. At the height of their spiritual renaissance, however, Elias became “the devil” to many of the other friars; they believed him to be a traitor to their ideals. After Francis’s premature death, the movement fractured. Scorned by most of the Franciscan leadership, Elias followed a path that would leave him a lonely, broken man. Sweeney shows how Elias’s undoing was rooted in his attempts to honor his old friend.

John M. Sweeney’s twenty books have combined sales of more than 225,000 copies. He writes for America and other periodicals and has appeared on Fox News, CBS News in Chicago, CBS Saturday Morning, WGN-TV, WTTW on Chicago’s Chicago Tonight, and PBS television, as well as a wide variety of radio programs. In 2015, Sweeney received a second-place award for history books from the Catholic Press Association for When Saint Francis Saved the Church.

"In The Enthusiast, Jon Sweeney uses his sharp historical insight to shed light on the widely known, but little understood, friendship of St. Francis and Elias of Cortona. This book is an immense and important contribution to our understanding of the great saint."

"Among the hundreds of biographies of St. Francis of Assisi, The Enthusiast stands out as a truly great read. By telling the story of Elias of Cortona—who, in his zeal to honor his friend nearly destroyed the Franciscan legacy—Sweeney shows his gift for meticulous historical research and an eye for satisfying human drama."

"Drawing on historical accounts, early Franciscan narratives, and his own imagination, Jon Sweeney creatively tells the story of Francis of Assisi anew, introducing along the way a key figure in the medieval drama too often overlooked: Brother Elias. Remembered as part-villain and part-hero, Elias’s role in Franciscan history needs to be brought to light and Sweeney does his part to introduce the early friar to a new generation!"

"Jon Sweeney takes away the calcified, garden-statue image of St. Francis and returns to us something much more valuable. In The Enthusiast we meet the human saint, surrounded by the men and women who accompanied him in life and death. We meet a Francis who is flawed, strange, and disruptive, but unmistakably holy."

"In The Enthusiast, Jon Sweeney takes the world’s most popular lawn ornament and makes him a real, live human being with a complicated friend who almost destroyed St. Francis's entire life’s work. Sweeney shows us that even saints (and their well-meaning friends) are never that simple, and he’s refreshingly comfortable with the contradictions and tension at the heart of history, friendship, and humanity."

Advent and Christmas Wisdom from St. Francis of Assisi

The Gift of St. Francis

The First Christmas Tree and Other Stories

The Heartbeat of Faith 59 Poems, Fingerplays, and Prayers

The Death of a Wife Reflections for a Grieving Husband

The End of Suffering Finding Purpose in Pain

The Edge of Greatness Empowering Meditations for Life

The Geography of God's Mercy Stories of Compassion and Mercy