The Chants of the Holy Spirit Gloriae Dei Cantores Schola 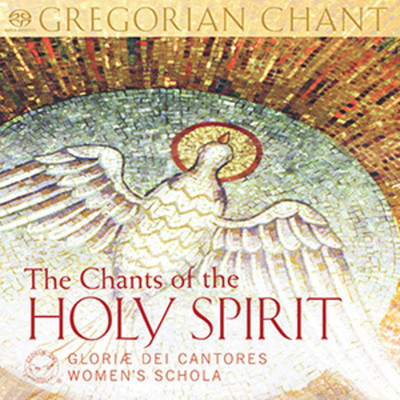 The disciples waiting in the Upper Room, the rush of wind, the tongues of fire, and the spreading of the Gospel are all depicted in these Gregorian chants from two masses for the Feast of Pentecost. Opening and closing with the traditional tolling of the Angelus bell, this SACD also features a reading of the Pentecost story from the book of Acts, and Guillaume Dufay's Veni Creator Spiritus. Three of the finest chant CDs have been released by Gloriae Dei Cantores: The Chants of Angels, The Chants of Mary and The Chants of the Holy Spirit. Put a Gloriae Dei Cantores' SACD on your surround sound stereo and be transported to a timeless place of eternal beauty.

...a schola of seven members of the choir[Gloriae Dei Cantores] based on Cape Cod have sung another collection of Gregorian chants, preparing the interpretations among themselves without a director. I was always impressed by the chant recorded here... but this new approach worked out for the last three discs strikes me very favorably... I hope they give us more, especially if the thematic program or the liturgical event is worked out as well as these are. Nicely done.

The seven ladies that make up the Gloriae Dei Cantores Women's Schola have given us a real gift for Pentecost... "The renditions of this music have rarely been as perfectly presented as what the Schola accomplishes here. . . . its primary vision [is] a living and loving manifestation of these ancient chants as something that breathes life into a contemporary cultural setting. Technically they are immaculate, and one can hear the evident love and devotion in every breath taken in this astoundingly beautiful music. ...a spectacular and well thought-out color booklet...and most importantly, some of the most helpful and descriptive verbiage I have ever read about Gregorian chant. This is a highly recommended disc.

The Chants of Christmas Gregorian Chant

Esperanza A Gift of Spanish Song

The Character of the Deacon Spiritual and Pastoral Foundations

The Christmas Stick A Children's Story

The Catholic Companion to the Angels

The Death of Innocents An Eyewitness Account of Wrongful Executions

The Breath of the Soul Reflections on Prayer