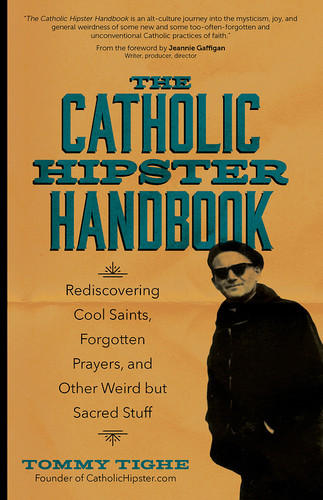 Being a Catholic Hipster is all about an attitude—an attitude grounded in being part of a countercultural community of believers dedicated to something bigger than themselves in a world dominated by self-centeredness. It’s about yearning to learn more about the faith by seeking out “Catholic cool”—overlooked saints, forgotten prayers and feast days, and traditional practices long set aside by mainstream believers. The Catholic Hipster podcaster Tommy Tighe will help readers rediscover everything awesome about the Catholic faith.

The Catholic Hipster started out in 2014 with a little bit of fun—the Catholic Hipster of the Year contest—on Tighe’s blog. But Twitter is where—in all its 140-character glory—that Tighe’s “The Catholic Hipster” movement really took root.  That’s where a group of cool and funky countercultural Catholics gather to swap one-liners, hilarious hipster memes, and all things authentically Catholic.

Tighe and a group of hipster friends—including Sarah Vabulas, Anna Mitchell, Fr. Kyle Schnippel, and Lisa M. Hendey—explore the beautiful weirdness of the Catholic Church and invite others along for the journey. They share their love for extraordinary saints, offer up obscure prayers, provide short reflections on something quirky and Catholic they’ve rediscovered, and dare readers to put their faith into action with some cool and challenging practices they can do on their own.

The Catholic Hipster Handbook will help readers realize the only way to go against what’s normal and accepted in the culture is to be authentically Catholic.

Peek inside!
Written by Tommy Tighe

“The Catholic Hipster Handbook is an alt-culture journey into the mysticism, joy, and general weirdness of some new, and some too-often-forgotten and unconventional Catholic practices of faith.”

From the foreword by Jeannie Gaffigan, Comedienne, actress, and writer

“The voices in The Catholic Hipster Handbook put Catholicism firmly in touch with our present world. The book speaks to the real need for a Church culture that is not only fully Catholic but also culturally authentic. It is also downright hilarious, painfully honest, and appropriately weird at times, too.”

“Tommy Tighe strikes gold with The Catholic Hipster Handbook. Funny, provocative, and serious while not taking themselves too seriously, you'll love the contributors for their delight in the Lord and their pursuit of the quirky joys hidden in a 2000-year history of devotion and prayers in the Catholic Church.”

Maria Morera Johnson, Author of My Badass Book of Saints

“Funny, informative, intriguing, creative and surprising . . . all the things you expect a hipster book to be.”

Allison Gingras, Reconciled to You

Tommy Tighe is a Catholic husband and father of four boys living in the San Francisco Bay area, where he works as a marriage and family therapist.

View all resources by Tommy Tighe

How To: Catholic Family Nurturing Faith in the Messiness of Everyday Life