Super Girls and Halos My Companions on the Quest for Truth, Justice, and Heroic Virtue 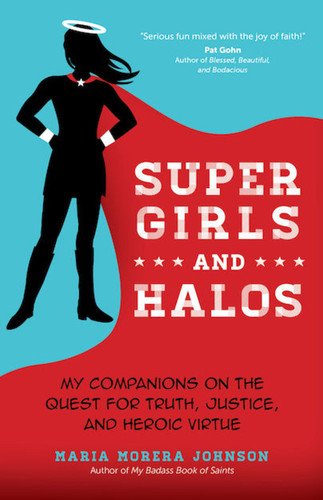 Super Girls and Halos: My Companions on the Quest for Truth, Justice, and Heroic Virtue

subtitle:
My Companions on the Quest for Truth, Justice, and Heroic Virtue
paperback:
true
min:
$12.76
title:
Super Girls and Halos

Award-winning author Maria Morera Johnson follows up her bestselling book, My Badass Book of Saints, with a unique and daring exploration of the cardinal virtues through the saints and heroines of science fiction, fantasy, and comic books. Johnson will reignite your passion for your faith as she demonstrates the heroic in the sometimes mundane quest for good and reminds us that Catholicism is filled with adventure.

What do Wonder Woman and St. Katharine Drexel have in common? How about St. Clare of Assisi and Rey, the ingénue from Star Wars: The Force Awakens? All four women sought justice for the abused.

With the same zest for her faith and cheeky wit that readers found so compelling in My Badass Book of Saints and a love for the heroic journey that highlights her career, Johnson now focuses on heroines—improbable pairings of saints and characters from sci-fi, comics, and fantasy—who have influenced her life and deepened her understanding of the Church’s cardinal virtues: prudence, temperance, fortitude, and justice.

Johnson tells her own story alongside the unlikely pairs to show how the cardinal virtues are at play in our lives as well:

With Johnson's enthusiasm as a guide, you’ll be inspired to embrace the virtues anew and find your faith in your favorite stories.

Discussion questions focusing on the cardinal virtues, making it a great resource for personal or group study.

What do you get when you cross Wonder Woman and Hermoine Granger with St. Katharine Drexel and St. Clare of Assisi? You'll have to read this unique book to find out! Maria Morera Johnson’s love of films is eclipsed only by her love of books. In her latest offering, Super Girls and Halos, she introduces a series of gutsy women who help us explore what is good in our own souls. Even though I’m not the science-fiction geek or literature professor that Johnson is, I loved her unexpected and eclectic pairings of intriguing heroines of the screen and the page alongside inspiring saints of the Church. This PG-rated mingling of fiction, films, and faith stories is a fab follow up to My Badass Book of Saints! It’s serious fun mixed with the joy of faith!

“Above all, Super Girls and Halos is a celebration of the genius, strength, and beauty of the feminine. Written with Johnson's signature wit and wisdom, this book will inspire you to join forces with God and become the hero of your own story.

"With wit and wisdom, Maria Morera Johnson pairs the excitement and adventure of fictional heroines with the integrity and tenacity of true heroines who walked this earth. This clever combination packs a punch, providing us with a powerful lesson on righteousness and inspiring us to live with the confidence needed to become virtuous heroines and heroic saints. A must-read for anyone looking to tap into her supernatural, God-given powers!

Kelly Wahlquist
Founder of WINE: Women In the New Evangelization and editor of Walk in Her Sandals

"Maria Morera Johnson has put together a collection of real and fictional heroines who deliver real kicks (and gentle taps) of correction to the notion that a colorful woman may lack moral wisdom or that a gentle woman is deficient in spiritual and social strength. These sisters are full of the right stuff, and Johnson serves up their virtues with a pow! and a prayer.

Elizabeth Scalia
US editor of Aleteia and author of Strange Gods

Superheroes and saints prove to be an irresistible combination. Maria Johnson has managed to expertly tell the stories of both with an eye toward the inner desires God has given each of us. This is the very best kind of catechesis and sure to be your favorite read of the year!

“Weaving Theology of the Body and super heroes together may seem like a hard task, but author Maria Morera Johnson makes it seem effortless. Flowing from stories about Wonder Woman as she relates to the feminine genius back into a reflection on the development of DC and Marvel characters, this book will appeal to women looking for culturally relatable ways of translating aspects of the Catholic faith into everyday dialect, without losing its potency. A great text for book clubs, Super Girls and Halos elevates the discussion of feminist characters and role models to a higher, more heroic level.”

Send My Roots Rain A Companion on the Grief Journey

Yearning for You, My God – A Companion for Praying the Psalms

By My Side A Teen Prayer Companion

Surprise! VBS My Book of Stories For Preschoolers

Sunday Dismissals for the RCIA

Stories of the Human Spirit