St. Teresa of Avila Her Life in Letters 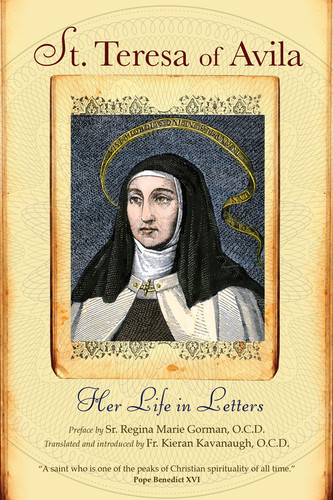 St. Teresa of Avila: Her Life in Letters

“A saint who is one of the peaks of Christian spirituality of all time.”
Pope Benedict XVI

St. Teresa of Avila, one of the most interesting and important figures in the history of the Catholic Church, was also one of the most candid, entertaining, and brilliant correspondents of her century. This selection of letters offers a unique “behind the scenes” look at this extraordinary Doctor of the Church with details of her life not originally meant for the public.

St. Teresa of Avila's formal works—The Interior Castle and The Way of Perfection—were written with an eye toward censors. Her personal correspondence, however, tell the story of her life in vivid detail, including her struggles to reform the Carmelite order; Spanish mysticism in its formation; and the extraordinary range of relationships she maintained with priests, theologians, royalty, fellow religious, advisors, and friends.

The letters begin when St. Teresa was forty-six—two years before she founded her first convent for Carmelite reform in Avila, Spain—and continue until her death twenty-one years later. She exhibits worries, troubles, sadness, joy, triumphs, and questions throughout. Recipients of these letters, and the people discussed in them, include some of the famous and fascinating figures of late sixteenth-century Catholic Europe: St. John of the Cross; Philip II of Spain; St. Peter Alcantara; St. John of Avila; Ana de Mendoza, the Princess of Eboli; and Jerónimo Gracián de la Madre de Dios.

The story these letters tell is one of enduring importance to the history of the Church. From nascent beginnings to more detailed plans, it is possible throughout St. Teresa of Avila: Her Life in Letters to witness the birth of Spanish mysticism, the reform of the Carmelite Order, and the experiences of contemplative prayer and meditation that resulted in The Interior Castle.

Peek inside!
Written by Teresa of Avila

“In these letters, beautifully rendered, the voice is very much alive, conveying the spiritual force (and rich humor) that changed so many hearts—and so changed the course of history.”

Mike Aquilina, Author of A History of the Church in 100 Objects

“Through her writings, St. Teresa often had heart-to-heart conversations with those she loved. Her Life in Letters is not to be read as an academic treatise; rather, St. Teresa's letters invite us to sit with her and learn from her experience, her grace, and her heart. Those who do just might find a new, lifelong friend.”

From the preface by Sr. Regina Marie Gorman, O.C.D., Vicar general of the Carmelite Sisters of the Most Sacred Heart of Los Angeles

The Life of St. Thérèse of Lisieux The Original Biography Commissioned by Her Sister

Three Saints Women Who Changed History - Genevieve of Paris, Catherine of Siena, and Teresa of Avila

God Alone Is Enough A Spirited Journey with Teresa of Avila

The Life of St. Paul

Through Death to Life Preparing to Celebrate the Funeral Mass

A Deacon Prays Prayers and Devotions for Liturgy and Life