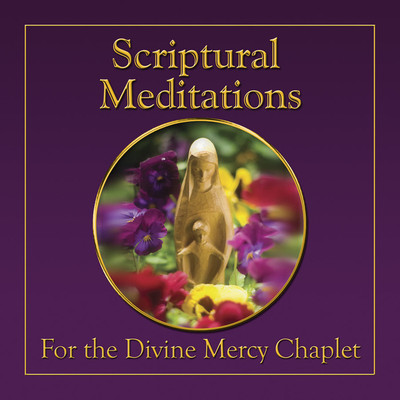 Scriptural Meditations for the Divine Mercy Chaplet offers one of the most popular Catholic devotions accompanied by a short passage from Scripture to inspire meditation on each mystery. A short history of the devotion, plus instructions for how to pray it using traditional rosary beads, is also provided. With original music written and produced by Sheldon Cohen, The Divine Mercy Chaplet is perfect for the Feast of the Divine Mercy and as a daily novena or a recitation on each of the five decades.

For more than thirty years, Shelly Cohen has been part of America's music community. Educated at Brooklyn College, The Julliard School of Music, and Hartnett School of Music, he became Assistant Music Director for The Tonight Show starring Johnny Carson in 1962 and remained so until Johnny's death in 1992.
His other television accomplishments include: Music Coordinator for the Emmy Awards and The Today Show's "Reflections of Irving Berlin and Richard Rogers." He also wrote and produced two Christmas Specials for NBC, "Christmas with Friends" and "Noel."
Shelly has also appeared as guest conductor with The Los Angeles Pops Orchestra, The Virginia Pops Orchestra, The Pasadena Pops Orchestra, and The Brentwood Symphony. In 1992 he formed the 80 voice New Horizon Singers and appeared in many venues in the Los Angeles area.
He is also the founder of The Pacific Pops Orchestra, a group of professional musicians who, in addition to concerts, are involved in many of Shelly's recording projects.
Recently, Shelly has become the Music Director for The San Fernando Valley Male Chorus and has formed his own swign band, The Swing Tones. In addition, he has produced and recording numerous albums for many major recording companies. Two of these were nominated for Grammy awards.
More recently, Shelly has branched out to write and produce shows for the stage. His altest were two shows for the West Valley Playhouse, "Klezmer Goes Hollywood" and "Once Upon a Time on Broadway." He is also a sought-after lecturer and in that capacity has toured both East and West coasts.
Written by Sheldon Cohen
×

Divine Mercy for Moms Sharing the Lessons of St. Faustina

Screenagers Growing Up in the Digital Age

Seeking the Truth of Things confession of a (catholic) philosopher

Saying Yes Discovering and Responding to God's Will in Your Life