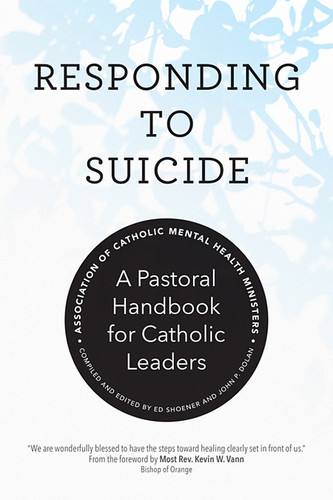 Responding to Suicide: A Pastoral Handbook for Catholic Leaders

Many pastoral leaders feel ill-equipped to respond to the turmoil of those who face the death by suicide of a loved one. Responding to Suicide is the first book written for Catholic leaders that takes a holistic approach to understanding suicide and ministering effectively in its aftermath.

More than a dozen leading mental health practitioners, Catholic theologians, and pastoral care experts share how best to respond to suicide as leaders in parishes, schools, healthcare systems, and other Church settings. The book offers a cross-disciplinary approach that provides basic information about the central role of mental health in suicide and clarifies Church teaching about suicide, funerals and burials for those who have died by suicide, and their afterlife.

Death by suicide is usually sudden, often violent, and frequently comes at the end of a long and difficult struggle with a mental illness. Heaped on top of that is a social stigma that leaves loved ones in shock and often burdened with shame. Responding to Suicide addresses common concerns of the bereaved following a suicide: skepticism that Catholic leaders will understand; fear that the Church teaches that their loved one is in hell; and belief that they will find little if any support in the Church.

Peek inside!
Written by Association of Catholic Mental Health Ministers

“A beautiful blending of the personal and the pastoral, Responding to Suicide is a revelation—and something the Church has needed for a long time. Deacon Ed Shoener has taken his own grief and transformed it into a moving and consoling gift that will benefit Catholics everywhere who have lost a loved one to suicide. The contributors of this powerful book teach pastoral leaders how to offer insight, compassion, consolation, and hope.”

Deacon Greg Kandra, Journalist and blogger at The Deacon’s Bench

“Responding to Suicide is, to say the least, urgently needed. As deaths by suicide increase, we Catholic leaders must equip ourselves with compassionate truth instead of pastorally inadequate and too-often inaccurate words and gestures. So much misunderstanding surrounds Catholics and suicide, which is precisely why this book is not just very good but also is essential for those of us charged with the pastoral care of God’s people.”

“Responding to Suicide is a fantastic book and great gift to the Catholic Church. This is a valuable and practical resource for anyone serving in ministry. Led by personal testimony from Catholic leaders, this book dispels the stigma of suicide on a pastoral level and advances this necessary discussion with clarity, humility, and courage.”

Scott Weeman, Founder and executive director of Catholic in Recovery

“Our country loses an estimated twenty veterans a day to suicide. It’s not enough to feel terrible about this tragic situation; we must try to do what we can to help our fellow human beings who are in crisis. Help and resources are available. This book provides urgently needed information and practical guidance. I highly recommend it. Please help.”

Pastoral Care to the Aged A Handbook for Visitors