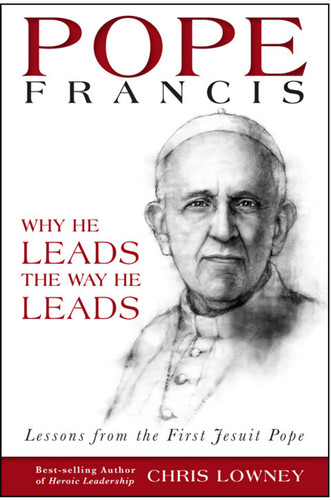 Pope Francis - Why He Leads the Way He Leads: Lessons from the First Jesuit Pope

From choosing to live in a simple apartment instead of the papal palace to washing the feet of men and women in a youth detention center, Pope Francis’s actions contradict behaviors expected of a modern leader. Chris Lowney, a former Jesuit seminarian turned Managing Director for JP Morgan & Co., shows how the pope’s words and deeds reveal spiritual principles that have prepared him to lead the Church and influence our world—a rapidly-changing world that requires leaders who value the human need for love, inspiration, and meaning.

Drawing on interviews with people who knew him as Father Jorge Bergoglio, SJ, Lowney challenges assumptions about what it takes to be a great leader. In so doing, he reveals the “other-centered” leadership style of a man whose passion is to be with people rather than set apart. Lowney offers a stirring vision of leadership to which we can all aspire in our communities, churches, companies, and families.

Pope Francis by Chris Lowney is that rare and splendid work that leaves you keenly excited and spiritually moved. The writing is lucid, vivid, inviting, and rich. It’s a major achievement. I strongly recommend it to any Christian in a leadership role.

In our interconnected world where so many complain about a crisis of leadership, Chris Lowney presents the case of Pope Francis, a leader focused not on status but on mission.  This is a powerful book for leaders of all stripes, religious and non-believers alike, who recognize the need to cultivate character and the ability to hold competing values as we navigate change, whether in business, organizations or society itself. I highly recommend it.

For people of faith or no faith, Chris Lowney's Pope Francis: Why He Leads the Way He Leads is a timely introduction to the mind and heart of a pope who has defied expectations and charmed the world.  In a culture that has become skeptical of institutional leadership, Lowney offers hope and insight into what an inspiring leader can look like.  Drawing on themes from Pope Francis' (and his own) formation as a Jesuit, Lowney's accessible book invites each of us to reflect on our own obstacles to successful leadership.  This book is perfect for anyone interested in better serving their families, schools, businesses, and organizations.

Throughout my business career, I attributed my leadership preparedness to my Jesuit education. Chris Lowney aptly communicates the nuances of the Jesuit charism that inspires so many of us.

Chris Lowney, a former Jesuit, served as Managing Director at J.P. Morgan in New York, Tokyo, Singapore, and London for seventeen years. A popular speaker on issues around leadership, he is the author of the best-selling Heroic Leadership and Heroic Living, and he has been featured in Forbes, the Harvard Business Review, and FastCompany.com. Lowney currently lives in New York where he is a consultant for the Catholic Medical Mission Board.