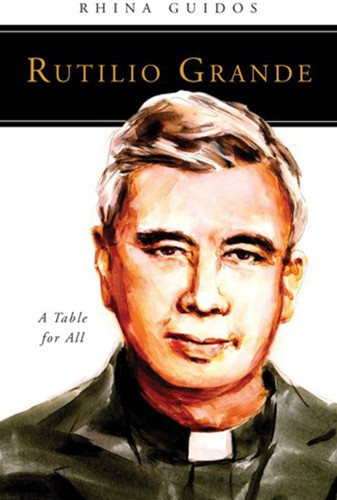 [People of God series] Rutilio Grande: A Table for All

In Rutilio Grande: A Table for All, veteran journalist Rhina Guidos explores the inspiring life and ministry of the Salvadoran priest whose killing changed the church in El Salvador and the life of his close friend, the country's most prominent church member, Archbishop Oscar Romero. Born in a rural and poor hamlet surrounded by sugarcane fields in El Salvador, Grande went on to study in Europe and Latin America as a member of the Society of Jesus. Though he found himself in the comfort of academia, he gave it up to return to the periphery of the rural world and its people. Inspired by teachings of the Second Vatican Council and a major bishops' meeting in Medellin, Colombia, he and a team set out to teach the poor to read, to stand up for their rights, and to call out injustices perpetrated by the government.

Grande's brutal 1977 assassination in a shower of gunfire marked the first notorious killing of a Catholic Church member during El Salvador's civil conflict, but made him one in a long line of El Salvador's Catholic martyrs.

Peek inside!
Written by Rhina Guidos

Though he was the spark that set the Gospel afire in the heart of Blessed Oscar Romero, Rutilio Grande has stood humbly in his shadow over the decades. Rutilio Grande: A Table for All helps to rectify that situation. It's a "must read" for those who want to continue to renew the church in the spirit of Vatican II or to simply read about a modern-day martyr.

Rutilio Grande: A Table for All, the story of Fr. Rutilio Grande touched my heart and my soul. It brings to life the story of Fr. Tilo's mission in his native country and his 1977 assassination as the first martyr of the Salvadoran Civil War. After 40 years our memory of the plight of the Salvadorans and the terror in their daily lives has faded. Rhina Guidos shows why this Jesuit priest's hallmark work to build faith communities that welcomed everyone to the table has placed him on the road to sainthood. Fr. Rutilio's memory is still alive in his people. He should rightly be thought of as the Martyr of Rural Evangelization. "Rutilio Vive."

This book, so beautifully and cleanly written, captures the life, ministry and gift of Rutilio Grande, SJ. Rhina Guidos successfully portrays the personality of a priest who lived, ministered and died with and for his people, a pastor who embodies the priestly ministry hoped for by Pope Francis. The style and accessibility of this text accurately presents the pastoral-theological model that was uniquely Rutilio Grande, his effect on the people he served, and the consequences of his love in a world that continues to crucify marginalized peoples.

Rhina Guidos is a reporter and editor at Catholic News Service. In that capacity, she covered the 2015 apostolic visit of Pope Francis to Cuba and the United States, as well as the beatification of Archbishop Oscar Romero in her native El Salvador. She is a former crime editor and has written about Latin America, crime and courts, immigration, minority issues, and politics at North American newspapers for 20 years.

The Church Cannot Remain Silent Unpublished Letters and Other Writings

Through the Year with Oscar Romero Daily Meditations

When the Gospel Grows Feet Rutilio Grande, SJ, and the Church of El Salvador; An Ecclesiology in Context

People of God series Oscar Romero Love Must Win Out

Sabbath Presence Appreciating the Gifts of Each Day

The Paraclete Book of Hospitality